The CaddyCruiser ONE folds extremely flat, which is a big plus as it makes it possible to fit both the cart and a golf bag in the trunk of a small car. The cart unfolds in a jiffy, and has sufficient storage space to fit your entire menagerie of fuzzy animal head covers.

It’s not the flashiest of carts, and the plastic wheels don’t exactly knife through the thick rough, but the CaddyCruiser ONE’s combination of features and functionality make it a solid value. 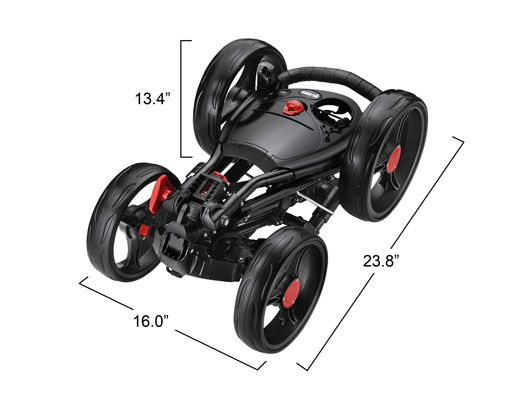 At 16 pounds (as tested), the CaddyCruiser ONE is a little lighter than the average push cart in our tests (compare this to the lightest cart, the Tour Trek Tahoe, at 10.5 lbs., and the heaviest cart, the Sun Mountain Speed Cart V2, at 20 lbs.). The CaddyCruiser ONE is a slim 13.4 inches tall when it’s folded, trailing only the Sun Mountain Micro Cart (12.5 inches tall). This makes for easy storage in the trunk of your car.

Assembling the Caddytek CaddyCruiser ONE took 14 minutes, and was simple enough, although the instructions left a little bit to be desired. The manual fails to tell you that when shipped, the axle of each wheel has a little rubber cover on it that needs to be removed before you pop it into the hole. Secondly, unless you read the “Package Contents” part of the manual, it isn’t obvious that the front wheels are a bit smaller than the rear wheels – at least until you install them in unmatched pairs. In any event, solving those problems doesn’t require a PhD from IKEA, and serve as mere bumps in the road.

The CaddyCruiser ONE is deserving of the “ONE” moniker, as it unfolds in a single step. Just put your foot on the front wheels and pull up on the upper part of the cart until the cart clicks into position. Voila, you’re finished! You can further adjust the handle height at that point, but you don’t have to.

Folding the CaddyCruiser back up is a 2-step process: push the release button on the handle, and then push down on the handle. The cart will fold in upon itself and will click into a retaining bracket when complete. The CaddyCruiser’s retaining bracket holds the folded cart together relatively well, and there is less danger of the cart drooping and beginning to unfold when you pick it up with one hand.

The Caddytek CaddyCruiser ONE has the same EVA plastic tires as the CaddyLite ONE, which don’t roll as smoothly as foam or air tires. The extra effort required to propel the cart isn’t overwhelming, but you’ll notice it when trekking through heavy rough. The advantage of having four wheels is that the cart stays pretty stable on the course. With our CaddyCruiser test cart, we didn’t experience any of the creakiness that we found in the CaddyLite – maybe somebody just did a better job of tightening the nuts and bolts! 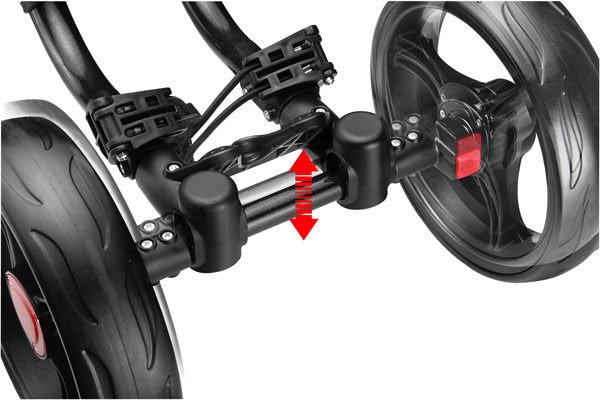 The storage and accessories available on the Caddytek CaddyCruiser ONE include: 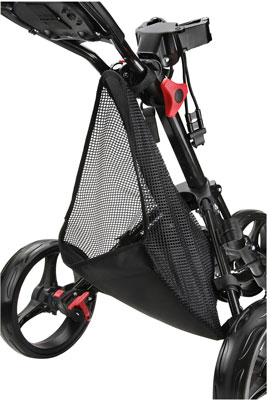 The CaddyCruiser is available in black or white. The wheels are black with red trim on both the black model and the white model we purchased (although we note that in Caddytek’s marketing photos, the white model is shown with yellow trim)

The Caddytek CaddyCruiser ONE retails for $189, placing it as the third least expensive golf push cart we tested, and generally seems to be available for even less at Amazon, The Golf Warehouse (TGW) TGW and other retailers. At that reasonable price, it comes with features not found on higher priced carts, including the extra storage basket and the suspension on the front axle.