So you’ve decided to want to maximize your Vitamin D while not in your cubicle? A convertible is just what the doctor ordered. If you are having difficulty justifying this purchase to your spouse, keep in mind that auto manufacturers do indeed design these cars to work with child seats (the time to starting working on that golf scholarship is NOW!).

What might not work in a convertible when the top is down, however, is a set of golf clubs. So for those searching for a 2011 convertible that can hold a set of golf clubs in a standard carry bag with the top down (makes it nice to leave your clubs in the car at all times, or to get extra rays to and from the course), here’s a list of what we found.

What Are the Best Sports Cars for Golf Clubs?

Audi A5. As one of the few soft top 4-seat convertibles on the market, and a reasonably large car, would you expect a lot of trunk space. Most players will be able to fit their own set of clubs into the trunk, but you’ll be hard-pressed to fit two sets. In most cases players will need to remove their driver, and perhaps one or more other woods, from their bag in order to get them to fit as well (my driver barely fit diagonally, resting on top of my bag). There is easy trunk access even with the top down (not the case with all convertibles), so you can put the clubs in before the top is lowered or after. If you need to get to the course just that much faster, don’t forget about the S5 convertible!

Bentley GTC. For those who have won the lottery, have already donated to their favorite charities, and still have more money than they can spend, consider the ultra-exclusive Bentley GTC convertible. The 0 to 60 time of 4.8 seconds will ensure you make your tee times, and that’s with the top down and two sets of clubs in the trunk (this is claimed by Bentley, though unfortunately we couldn’t confirm this…but we sure wish we had the opportunity).

BMW 1-series. The soft top saves enough space to let you to store your set of clubs in the trunk (makes me wonder if customers might shift from the hardtop 3-series to the 1-series just for the trunk space!). Depending on length of driver you may have to remove from your bag, but still can fit in the trunk. Overall the trunk space is similar in size to the old soft top 3-series with soft top, so you can squeeze in two.

BMW 3-series. Such a great car, but sad to say, it has virtually no room for any luggage with the top down. We miss the days of the 3-series soft top with spacious trunk. If you are looking to stick your clubs entirely in the trunk, you’re out of luck. You’ll have to use the pass-through (largely intended for skis) into the back seat area. And you’ll need to do this while the top is up – after the top is lowered access to the trunk is severely limited (not large enough of a gap to slip much in or take out, certainly not a set of clubs).

BMW 6-series. So you say you’re an investment banker, lawyer or doctor? Or just have the ability to splurge? The BMW 6-series could be just the ticket. The largest BMW convertible made, it is also the only one that can fit a set (actually 2) with the top down – ahh the benefit of a soft top plus lack of a spare tire (the 6-Series vehicles use run-flats).

BMW Z4. No soup for you! While you can fit two with the top up, without using the pass-through you won’t be able to squeeze a set in the trunk (and only one set will fit through the pass-through)

Chrysler 200 Convertible (aka Sebring) . An spacious trunk will let you consume American-style. And even fit 2 sets with the top down. U-S-A! U-S-A!

Chevrolet Camaro. Alas, with a small opening and little room, the golf clubs would have to join you in the passenger seat.

Chevrolet Corvette. You’re good to go in the late-model Corvettes…drop the top, and load it up…and peel out. The corvette actually even advertises that two sets can fit with the top down, the only manufacturer that seems interesting in answering this question straight up on their website

Ford Mustang. American cars are supposed to be big (right?), and in this case, the trunk certainly is. You’ll be able to stash two full sets in the trunk with the top down. You won’t be able to pump all the jams you want, however – two sets can fit as long as you avoid the Shaker 1000 audio system

Infiniti G37. The Infiniti G37 convertible isn’t a small car overall (4 seats), but the trunk space is completely disappointing. As the salesperson lifted the trunk and then began to put the partition in place (to divide the area where the top collapses from storage area with the top down), we hoped to still have enough area for a set. When he was done, not only was there no real storage space, it was the smallest area of any convertibles we checked out. Enough room for your shoes, glove and some suntan lotion, but don’t count on much more. The purpose of the partition it seemed is only to remind drivers that they can’t keep have anything in the trunk when putting the top down. Bummer

Jaguar. I would have expected Jaguar to cater to clubs, but such is not the case. No clubs can fit in the trunk of this car, instead they’ll have to ride in the back seat. C’mon Jaguar… Just for that, I’m not going to buy this car

Lexus IS C (250/350) . I didn’t believe the car was going to be able to fit. When the dealer pulled the trunk divider (this separates the area where the roof is stored when down versus area to keep goods stored in the stunk) in place, the room left to fit anything with the top down shrank considerably. No chance of fitting serious luggage or a large roll-bag in here with the top down. And I didn’t think a chance of fitting a set of clubs either, but lo and behold…the entire set fit (perfectly – almost as if this car was designed specifically to hold a set of clubs), even with the woods left in the bag! Lexus managed to leave the interior sides of the trunk, usually occupied by the structure for raising and lowering the top, open to store the set. Aside from the bag and clubs there isn’t not much room left…maybe a pair of shoes, but not much for additional bags

Maserati GranTurismo. With no chance to check this car out in person, we can only say that those who have checked this car out describe its trunk as very small. If you were thinking of purchasing this car via eBay Motors, you may want to check it out in person first

Mercedes E-Class. These soft-top convertibles (E350 and E550) let owners enjoy a lot of trunk space, continuing the spaciousness of the CLK series. Enjoy 2 sets of clubs in the back without any issues. Well done, Mercedes! Now about the cost…

Mercedes SL-Class. This convertible unfortunately can’t take a set of clubs in the back. Salespeople indicate that the 2012 Mercedes SLK will have a wider trunk to accommodate a set of clubs. I guess enough players walked out of the dealership in 2011 that they got the picture…

Mini. Like the name says…”Mini.” Little car, little room. No clubs in the “trunk.

Saab 9-3. Another one of the increasingly rare 4-seat convertibles still sporting a soft-top, it can fit 2 sets with the top down. And before you ask…yes, this car is still in production. Well, kind of. Consider its operations more on a day-to-day basis. If you are interested, you better buy while you can – no telling how much longer Saab is going to be around!

Volvo C70
The C70 has a spacious trunk which two different “tiers” (somewhat like a swimming pool with a deep end, though the deep end is in the middle of the trunk). Volvo also has a rather ingenious design that allows the owner to, which the top is still down, raise a portion of the roof enough to be able to access the trunk area, put stuff in to take it out, and then lower the section again. This in contract to other vehicles like the BMW 3-series where you would need to put the clubs into the car before putting the top down.
You can fit a bag and clubs in the vehicle with the top down, and you can alllllmost fit a driver and fairway woods as well, but unless you want to put a little flex on them, you’ll want to keep those in the back seat.

So until our return visits to check out the 2012 models, there ya go. Happy shopping! 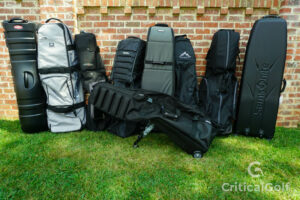 The Best Golf Travel Bags for 2023: Reviews and Buying Guide

The Best Push Carts for 2023: Reviews and Buying Guide 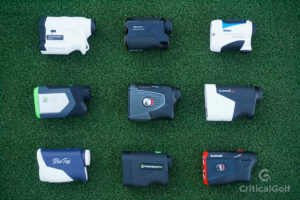 The Best Golf Rangefinders for 2023: Reviews and Buying Guide

Launched in the spring of 2009 to shed light on the confusing world of golf equipment.

Our testing staff includes players ranging from low to high handicappers to provide perspectives relevant to all golfers, regardless of ability level. Each product is tested by all staff members to give you the best insight possible.
Learn More