For those who are looking for distances but don’t want to shell out hundreds of dollars, there is an alternative – golf scopes. Some are going to claim foul right off the bat, as the Bushnell 5×20 Golf Scope rangefinder isn’t technically a laser rangefinder. And yes, maybe it is an unfair fight stacking it up against others in this category. But given that most players will evaluate golf scopes against laser rangefinders, let’s see if it can punch above its weight.

It is best to first examine what the Bushnell promises for the 5×20 – right there in the marketing material they tell you that the device “estimates distances to the flag from 50 to 200 yards/meters.” If you think about it, this covers most of the distance information you need. The device neither has a laser nor does it calculate distances for the player, rather the player is left to estimate distances to the flagstick on his/her own. This is done through lining up the flagstick in the display against distance lines…hey, just like the sextant on your boat.

The device is based on the assumption that the course has 8-foot flagsticks. If it doesn’t, then you are going to have to do a bit of guesswork. In addition, if the base of the flagstick where it enters the hole isn’t visible, you’ll only be able to estimate distances if the flagstick has 1-foot stripes (not all of them do), and in addition to estimating the distance within the viewfinder you’ll need to do some math on the fly.

The device is incredibly light, doesn’t require batteries, and at $25 retail is just a fraction of the cost of a laser rangefinder. But this is really only going appeal to a certain set of players (you liberal arts majors can move on to a review of a different device right about now). It can be challenging to feel comfortable with the estimated distance (yes, lasers are much easier), but if you only care about distance to flagsticks once you are within 200 yards, and accuracy within 10% is good enough, this could be a handy little device to have.

The Bushnell 5×20 Golf Scope is incredibly small and light, just a fraction of the size and weight of standard laser rangefinders. The device is cylindrical in shape, 3-3/8″ long and 1-1/8″ in diameter, and at mere 2.2 ounces, is barely noticeable in your pocket during play (you can also use the small carrying case that comes with it) . The monocular (a fancy new vocabulary word – but you must understand the difference between the monocular and the binocular, right?) is made of aluminum and features a black rubber grip around the center of the body and an attached strap, which we found unnecessary. 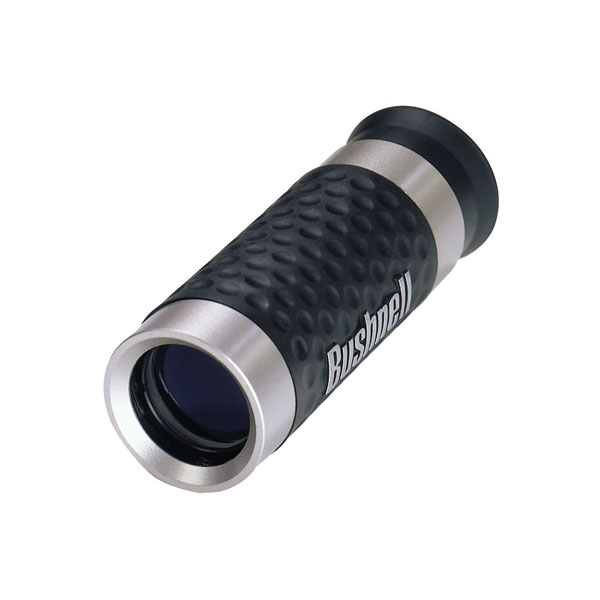 The 5×20 features 5x magnification and is focus-free. Distance markings are clear within the display, but the pin won’t necessarily be, depending on the distance. The device has a rubber roll-down eyecup designed to block out extraneous light, which can be retracted for users who wear glasses. With no buttons and no batteries required, there isn’t much to cause trouble. Bushnell is even nice enough to throw in a lint-free cloth to clean the lens. How thoughtful! 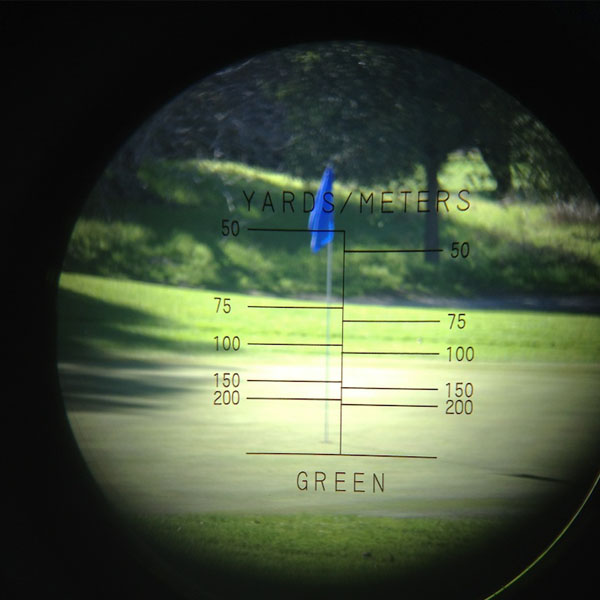 While the device is extremely straightforward in use, actually obtaining accurate readings can be quite challenging. The accuracy of your distance reading doesn’t depend on the Bushnell, but rather on how good you are at keeping your hands steady and estimating distances. Hey, caffeine and wind happen.

This is pretty easy…there really aren’t any features. The display has distance indicators for yards and meters, so perhaps that counts? We’ll count the lack of batteries as a feature too.

Bushnell claims that the device can measure the distance to flagsticks at a range of 5 to 200 yards/meters. Keep in mind that the Bushnell 5×20 Golf Scope is designed to help with readings to 8-foot flagsticks only (flagsticks customarily range between 7 and 10 feet). Furthermore, if you need to estimate distance when the base of the flagstick isn’t visible (if there is mounding on the green or in front, for example), the flagstick needs to be striped (at 1 foot intervals) for you to be able to try to calculate distances. 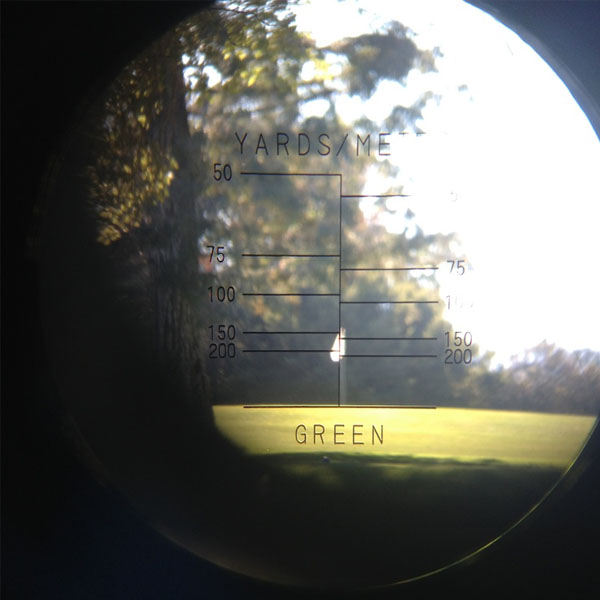 Unlike laser rangefinders, which provide you with a distance reading at a push of a button, the Bushnell 5×20 will make you work for your yardage. There’s a bit of effort and time required to be comfortable with your distance estimation, and we found that devoting additional time to try to better estimate the distance didn’t necessarily ensure we were any more accurate.

Our initial experiences with the Bushnell 5×20 Scope immediately highlighted the difficulties in using the device. Our first three rounds using the device included courses with flagsticks that were 7-feet (can’t use the Scope), 7 ¼-feet (also can’t use the Scope), and 8-feet (could use the Scope). As an aside, none of the first three courses had stripes on the flagstick, which means the Scope was unable to help estimate distances in all the situations where the full flagstick wasn’t visible. Didn’t think flagsticks varied this much? Neither did we. Furthermore, one of the courses had practice areas with both 7-foot and 9-foot flagsticks.

When playing on courses with 8-foot flagsticks, we found that our readings remained within 10% of actuals, with accuracy within 5% on average. In most cases we found that we were usually “off” in the same direction. Sometimes our estimates were accurate within a yard, sometimes within 10 yards, sometimes more. In addition to the challenge of holding the Scope nice and steady, the blurriness of the flag and green at a distance, the lighting, and subtle contours can all make it difficult at times to tell if the full flagstick is visible. In short, there really is no comparison to laser rangefinders, where you point, shoot, and get a distance.

If the base of the flagstick where it enters the hole isn’t visible, then you’ll have to do some math to estimate the distance. To do this you line up the horizontal line labeled “GREEN” with the bottom of the lowest visible stripe on the flagstick, estimate the distance reading at the top of the flagstick and then bust out your math skills: multiply the number of visible stripes by the estimated distance, and then divide that number by 8. Don’t like math? Time to visit Greg Tang! But even if you are a numbers whiz, you’ll still be out of luck if the flagsticks don’t have any stripes (we actually do play at courses that have stripe-less sticks). Curses!

If you really want to get into detail, keep in mind that there is variation in the depth of holes (the USGA requires only that holes are at least 4 inches deep), and additional caps or laser reflectors on the flagstick may add inches to the overall height. What this means is that there will always be some amount of variability to build into your estimates.

So the question then is…who benefits from this device? Beginners might find the ballpark distances to be good enough. And there are always those who don’t want to spend the dollars on a device (and laser rangefinders are not cheap). Is +/- 10% close enough for you? And if it is close enough, do you mind not being able to use the device to objects other than flagsticks, or beyond 200 yards? Lastly, do you mind having to do a little math when the entire flagstick isn’t visible?

We can’t run our usual rangefinder speed test with the Bushnell 5×20 Scope as it can’t help estimate distances to any objects other than 8-foot flagsticks. As far as speed, it is as fast as you can pick up the scope, make sure you have it oriented in the correct direction so the distance markings in the display are right-side-up, and then how quickly you can get an estimate close enough for your needs. If the full flagstick isn’t visible, your speed will also depend on how quickly you count the visible stripes, and then do some multiplication and division. Ready….go!

At $25 retail, which is a mere fraction of the retail price of laser rangefinders, the Bushnell 5×20 Scope piqued our interest enough to take a look. But price isn’t all that drives our score in this category – the real question is whether a device also provides real value at that price. The Bushnell 5×20 Golf Scope does its job, but the value is limited due to the fact that you can only determine distances to flagsticks, with the additional conditions that the flagsticks are 8-feet tall and also have stripes (if you want to get distances when the flagstick base isn’t visible).

An additional factor is the device’s dependence on how steady you can keep your hands, which is no small task in and of itself, while simultaneously estimating points between the horizontal distance lines. The inability to accurately estimate within 5 or 10% means that the Bushnell 5×20 Scope isn’t for everybody. But if it’s not accurate enough for you, you can always use it bird-spotting…