The Bushnell Tour v3 JOLT builds upon the prior generation Bushnell Tour V2, with the same magnification (5x), range performance (5-1000 yards), and accuracy (to within 1 yard). The Tour v3 introduces Bushnell’s JOLT technology, which provides short bursts of vibration to indicate that its PinSeeker technology has locked onto a target. The JOLT technology may not be for everyone, but if you don’t like it, you can turn it off – we found ourselves appreciating it more over time. We do note that the Tour v3 does not always indicate that it has locked onto the target (via icon of a circle surrounding the flagstick in the display) even when it is returning the correct distances, and if the device hasn’t determined that it is locked on, there will be no accompanying vibration. As a result, it became clear that we didn’t absolutely have to have indication that the laser was locked onto a target – if the distance appears accurate, it probably is.

When you fire the laser, the distances will intermittently update as you pan across objects. We found that the laser can continue to fire in the range of 3-5 seconds before it locks onto a target, after which the yardage will continue to display for 15 seconds after the firing button is released. Distances to additional targets can be obtained even after PinSeeker has locked onto a target if you continue to pan.

The Bushnell Tour v3 JOLT is a solid device and at $299, is $100 less than the Bushnell Tour V2 and one of the least expensive golf laser devices tested. It provides quick and accurate readings even without verification, which was OK with us. But if you are keen on the PinSeeker and JOLT functionality, just realize that you may not get feedback with every reading. 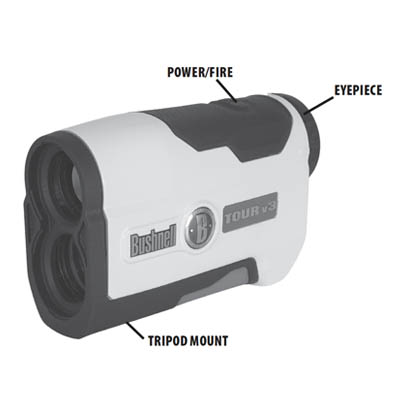 The device keeps true to the latest color scheme of Bushnell laser rangefinders, featuring a primarily white plastic body with black plastic accents and rubber in the grip areas.

The grey nylon carrying case is firm but not solid, providing adequate protection for the Bushnell Tour v3 JOLT. The zippered case is primarily grey, with black and red highlights. The case opens to about 35 degrees, with netting at the sides that does a nice job of preventing the rangefinder from falling out if you elect to leave the case open for easy access during a round. The Tour v3 JOLT easily slides in and out of the case, and the case can be attached to a bag or cart with the attached elastic loop or black carabiner. A small dust cloth is included for wiping the lens clean.

There is only one button on the Bushnell Tour v3 JOLT, the power/laser button, which is located on the top of the device. This button not only powers the device on and off and fires the laser, but is also used to adjust settings (switching between yards and meters and turn the JOLT feature on and off) if the button is held down when powering up (see below). There is no ability to change the cross-hair style.

As with most laser rangefinders, pressing the power/laser button turns on the device, and then pressing the button a second time will begin firing the laser and returning distances. The Bushnell Tour v3 JOLT displays the line-of-sight distance below the aiming circle, which has cross-hairs surrounding it when the laser is being fired. To the left of the distance reading is a flagstick icon that is part of the PinSeeker indicator – when the device has locked on to a target (which does not have to be a flagstick), a circle will surround the icon. When the player releases the power/laser button, the line-of-sight distance will continue to be shown for approximately 15 seconds. The aiming circle, cross-hairs, and distance information are presented in black, as the v3 lacks Bushnell’s “Vivid Display Technology.” Using an LCD display with distances and slope information in black can make information potentially more difficult to see against dark backgrounds. The Bushnell Tour v3 offers only 5x magnification, which is at the low end of among the laser rangefinders we have tested.

The Tour v3 JOLT has an adjustable eyepiece (+/- 2 diopter adjustment) that requires a firm twist to adjust. While it’s possible to adjust the eyepiece with one hand while looking through the viewfinder, most people will find it easier to hold the device with one hand and adjust with the other. Unlike the high-end Bushnell golf laser rangefinders, the eyepiece does not twist “up”, which is used by some laser rangefinders such as the Bushnell Pro 1M to shield off extraneous light.

The Bushnell Tour v3 JOLT uses a single CR-2 3-volt lithium battery that inserts through a twist cap on the right of the device. Bushnell recommends replacing the battery once every twelve months.

The Bushnell Tour v3’s always-on PinSeeker mode is prevalent in the Bushnell line and most competing products have a similar feature, all with the goal of locking onto the closest target within a line of sight, which under most circumstances is a flagstick against a background of trees or hills. PinSeeker works as well as it has on the Bushnell devices we have used in the past, which is to say that it is generally quite good, but not infallible. Occasionally the Tour v3 will lock onto objects behind the pin. It doesn’t happen often enough to give us any pause in recommending the device, and in the cases where it would initially provide distances to the background object (which is generally pretty obvious), a quick re-fire usually righted this wrong. “PinSeeker” is a bit of a misnomer, as it can provide locked-on distances to any target – trees, bunker faces, mounds, the group in front of you that you are considering driving into…

If a circle is not shown around the flagstick icon within the display, the device may still be providing the distance to the appropriate target, but for whatever reason is still sensing multiple objects in its path. We experienced this situation fairly frequently, and although there was no indication that the device has locked on to the target, it would still return the correct distance. It is difficult to say exactly when the Bushnell Tour v3 JOLT will “lock” onto a target and display the circle around the flagstick icon (indicating PinSeeker has found a target). Curiously, the device will often allow players to continue panning across targets (even after it JOLTS and displays the PinSeeker icon) for a range of 4-10 seconds 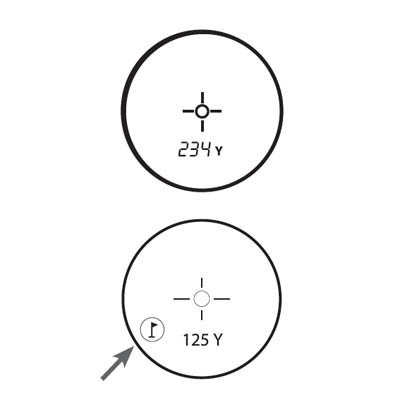 Lastly, let’s talk about the newest and most heavily-marketed feature of the Bushnell Tour v3: Bushnell’s JOLT technology. While most laser rangefinders provide some indication that the device has locked onto a target through either through some icon on the display and/or a beep or a tone, the Bushnell Tour v3 is the first device that adds haptics to a laser rangefinder. We weren’t enamored at first and looked for a setting that would enable us to turn the pulsing vibrations off (and while the manual indicates you can turn off JOLT, we aren’t able to do so on our device); however, over time we grew to appreciate the additional validation of locking onto a target. Some players will like the feature while others are satisfied with just a visual indicator and will find the JOLT to be no more than a marketing gimmick. Interestingly, the JOLT functionality hasn’t raised the price from the prior generation device (see ‘Value’, below), so whether you like it or not, at least you aren’t paying more for this feature compared to last years’ device.

The Bushnell Tour v3 provides distance information in 1-yard increments. The displayed distances don’t blink when they are being refreshed, so there are times when you’re firing the laser that you may wonder if the device is doing anything. If you’re in doubt, just check if cross-hairs are shown around the center aiming circle – that’s the indicator that the laser is being fired.

Additionally, the device is rainproof and has coated optics that are intended to help whisk away the rain and dust.

Bushnell claims a range of 5 to 1,000 yards for the Bushnell Tour v3 under optimal conditions, and 300+ yards to a flag. The top-of-the-line laser rangefinders will reach farther distances, but we find that maximum range of a rangefinder is less important than the actual performance in picking up targets within its capabilities and the ability to precisely pick out pins in the 150-350 yard range.

Ease of Locking on a Target:
The Bushnell Tour v3 did an admirable job of picking out targets. At 185 yards or less it was able to lock onto targets and give us a JOLT the vast majority of the time. The device started to struggle to lock on to targets beyond this range against difficult backgrounds, with increasing challenges at more than 200 yards. It is important to note that while the device did not necessarily lock on to the flagstick at farther distances (and thus did not provide the PinSeeker icon or accompanying JOLT), it still has the ability to return an accurate distance. If you’re holding down the laser button and the displayed yardage is no longer varying, the device is usually providing the distance to the desired target.

We found that the displayed yardages update at the same rate of speed regardless of the distance to the target. There may be a brief pause while it initially locks on to a target, but this can occur regardless of distance.

Speed Test:
The Bushnell Tour v3 is as speedy as any laser rangefinder we’ve reviewed, recording one of the fastest times in our tests of locking onto multiple targets. Even with the always-on PinSeeker mode, we could quickly get distance readings and re-fire at additional targets. You can get accurate distances to points without the device needing to lock on and freeze at a distance reading, so you can pan among several targets without needing to re-fire the laser. In truth, however, we found it much faster to simply press the laser button again anytime we wanted distances to additional targets. We did observe some incorrect distances returned when alternating between bunker faces and other parts of the course, but these were relatively limited during our tests.

At only $299 retail, the Bushnell Tour v3 JOLT is one of the most reasonably priced laser rangefinders on the market, and even carries a 2-year warranty. While it has slightly less magnification than most of the competition and lacks bells and whistles such as OLED displays and the slope-adjusted distance information, it still offers compelling value. It has a sporty look, Bushnell’s PinSeeker technology, and if you are into things that vibrate, you’ll dig it even more.