The Callaway iQ as a golf-focused evolution of the Callaway idTECH, and is part of the current Callaway lineup of four rangefinders. The Callaway iQ features 6x magnification, matching the highest of any Callaway rangefinder currently available, slope-adjusted distances (but not the angle of approach), and a new “Active Brightness Control,” which automatically toggles the display in the viewfinder from a black LCD readout to an orange LED readout depending on the lighting conditions. The iQ quickly updates distances during panning, picks up targets at a distance better than most of the competition, and has an exceptionally bright and clear display.

While the Callway iQ, with its crisp optics and strength in picking out targets at a distance (and with precision down to 0.1 yard increments, though it has a claimed accuracy to the level of +/- 1 yard) is a significant improvement on the older Callaway idTECH, we were disappointed by the short amount of time the iQ allows users to continue to fire the laser while panning across targets, the lack of information regarding the slope angle, and the reduced 6x magnification (down from 7x in the discontinued Callaway LR1200). We also found that the much ballyhooed Active Brightness Control didn’t kick in as often as we would have liked.

The Callaway iQ is one of the larger vertically-held laser rangefinders tested, at 4.6” x 1.6” x 2.9”, though it weighs in at 7.0 oz. It comes with a lightweight soft case designed to be kept on the device during use (with “Nikon”, the manufacturer of the device, branded on the side) and a carabiner clip to attach the iQ to a bag or cart (though reviewers tired of having to clip and unclip the carabiner each time and would have preferred a pouch similar to the Leupold devices). The “case” features a removable lens cover with a button on one end and magnetic latch on the other. Users can either remove this cover entirely during play, or simply pull the cover away for each reading.

In many laser rangefinders the distance information is displayed in the viewfinder with black or dark grey numbers. Against a dark background, trees or shadows, these numbers can be challenging to read. The Callaway iQ addresses this problem with its “Active Brightness” technology – the information displayed in the viewfinder changes from a black LCD readout to an orange LED readout (the full display will change to a light orange tint) depending on the brightness in the background. When it works, it is quite a nice feature, the Active Brightness feature didn’t activate often enough for our liking, leaving us with the black LCD display against darker backgrounds where we would prefer the orange LED readings. It would be a great addition for the user to be able to decide when to turn on the Active Brightness feature if it didn’t automatically enable. We also note that while the orange display is helpful when it’s activated, the crosshair and distance readings are still nowhere near as bright as the OLED display of the Leupold GX-3 and GX-4 in comparison.

There is no ability to choose from different styles of crosshairs – just one simple version with lines extending from the center of the targeting area, and additional lines emanating from the center that appear when the laser is fired.

The iQ rapidly generates distance readings, with the Bushnell 1600 Slope Edition the only competitor that provides slope-adjusted distances more quickly. Unlike all others, the Callaway iQ provides distances down to 0.1 (!!) yard increments. Talk about precise! No other manufacturer we tested ventures to less than 1 yard increments. Sadly, our games aren’t to the point where we’re deciding use the 175.2 yard swing or the 175.3 yard swing. But it’s nice to know that the Callaway iQ is ready when our game improves to that point. LOL!

Compared to the others in the group, the Callaway iQ’s eyepiece is relatively easy to focus with just one hand on the device. There are two buttons controlling the device, a power/laser button that powers the device on/off and also fires the laser, and a mode button to toggle between using yards and meters as the standard unit of distance.

The Callaway iQ takes one 3-volt Lithium battery. A battery meter is displayed in the bottom right of the viewfinder at all times. 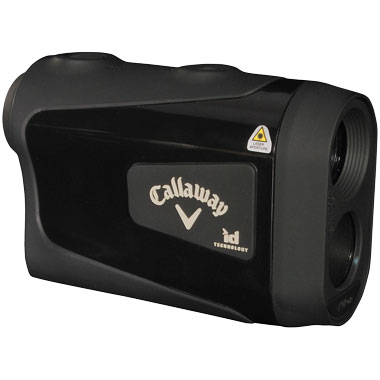 The newest (and most heavily promoted) feature on the Callaway iQ is its “Active Brightness” technology, which we’ve reviewed in detail above under “Ease of Use.”

Although the iQ in always in First Target Priority mode, it still allows the user to pan to different targets on the course and receive constantly updated distance readings by simply holding down the power/laser button. Unfortunately, continuous scanning is only available for a mere 5 seconds, after which the user must re-fire the laser. This is a bit of a pain for players that want to obtain multiple distance readings prior to playing their shot.

The only adjustable setting is to select whether you would like distances displayed in yards or meters, making the iQ about as straightforward a slope-adjusted distance finding rangefinder as you can find.

Callaway’s claims that the iQ can obtain distances from 11 to 915 yards, but doesn’t provide “performance ratings” of maximum distance readings for different types of objects.

In our speed test we found that the Callaway iQ was about average among devices tested.

For more details, check out the Critical Golf comparison for Ease of Obtaining Distance Readings.

At $429.95 retail, the Callaway iQ list price falls in the middle of the pack of laser rangefinders with slope, though it is one of the lower priced top rated rangefinders.

Above $400, purchasers should expect an awful lot, and while the device provides exceptional optics and ability to pick out targets at a distance, the relative infrequency with which the Active Brightness Control is applied, the 5 second limit on measuring targets panning, and the lack of slope information (in degrees) keep the iQ from reaching its full potential from a value standpoint.