The Callaway RAZR, manufactured by Nikon, offers some changes from its predecessor devices. The laser is 10% smaller than the prior generation, and ranks as the lightest laser in our tests (though not the smallest). The device offers the standard 6x magnification and focusing eyepiece.

Although the Callaway RAZR is marketed as providing faster readings, we didn’t notice an improvement over past Callaway laser rangefinders. We do appreciate, however, the 0.1 yard incremental readings all the way to a maximum of 600 yards. Keep in mind that the level of accuracy is more than likely +/- 1 yard (though not specified by Callaway). The device has a waterproof shell, and comes with a protective pouch to protect the lens and carabiner to clip the device to your bag. The laser will fire for 8 seconds when activated and provide continuous distance readings, the last of which remains displayed for 8 additional seconds after the laser is done firing.

The Callaway RAZR has First Target Priority mode (the equivalent of Bushnell’s PinSeeker or Leupold’s PinHunter), which is always on and is intended to pick up the nearest target in your line of sight. Why do we say “intended”? Because we found the RAZR to be one of the least sensitive among the laser rangefinders we have tested at picking out pins at near and far distances alike, necessitating firing only at the flag or, if visible, the base of the flagstick at the hole. The RAZR is slightly below average in cost across laser rangefinders that do not provide slope-adjusted distance information, but the slight discount isn’t enough to make us recommend this device.

The Callaway RAZR is a vertically-held laser rangefinder, with a grey, red and black elastomer (rubber) body, textured at the front half, with the body size and material easy to grip. It’s marketed as “shock resistant”, and although we didn’t perform any drop tests off of a moving cart on to concrete, the RAZR appears durable, and we’ll take their word for it.

Callaway has reduced the size of the RAZR from their prior generation rangefinder by 10%, down to 4.4″ x 1.6″ x 2.8″, making it the smallest in the Callaway lineup, but only average within the entire laser rangefinder field. The RAZR is, however, the lightest device in our tests, weighing in at 6.3 ounces on its own, or 8.5 ounces with the protective pouch and carabiner.

The protective sleeve provides a snug fit around the RAZR to both protect and hold the device, and has a built-in magnet to keep the attached cover closed. The pouch is a bit too snug for our tastes, making it difficult to slide the laser in or out with just one hand, though the tradeoff is that when the RAZR is in the pouch, it isn’t going to fall out. In addition to attaching the pouch to a bag or cart with the included carabiner, you can also use the belt loop on the pouch, or the clip that can attach directly to the laser and then to the carabiner, avoiding the need for the pouch. We never used the device without the pouch, as that leaves you with no protection for the device, and also requires that you take the time to unclip and reclip the device with each use. But you can’t say Callway doesn’t give you options! 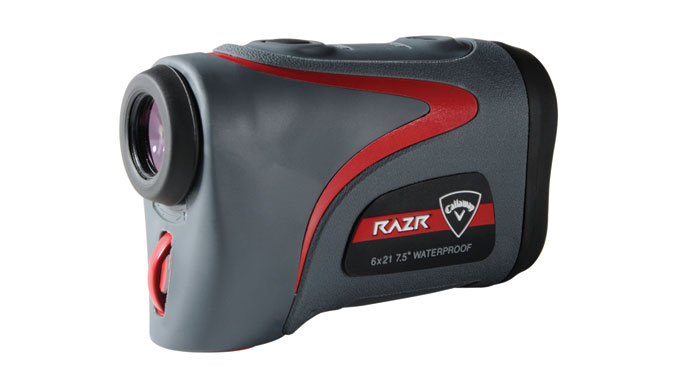 The RAZR LCD display features clear 6x magnification with a slight green tint, both standard on rangefinders these days, and a focusing diopter through an easy-to-turn eyepiece. To use the RAZR laser rangefinder, just firmly press the power button to turn it on, then press it again to begin firing the laser.

The LCD display shows the aiming crosshairs and distance reading in black. The crosshair is made up of 4 horizontal and vertical lines, with an opening at the center for aiming; an additional 4 lines forming an “X” around the center will blink while the laser is firing and the user pans across targets. The distance is continuously shown above the crosshair and updates at a steady rate as new distances are acquired. Although there is First Target Priority on the RAZR, the device will not stop updating distances when a target is acquired, but rather allows users to move between targets. We would prefer that the distances be displayed a bit closer to the crosshairs and be repositioned below the crosshairs, as the continuous updating of distances can lead you to frequently darting your eyes back and forth between the crosshairs and the distance display. The battery indicator is shown in the lower right corner of the display.

There are two buttons on the Callaway RAZR, both located on the top of the device. A power/laser button is used to turn on the device and fire the laser. The mode button, located nearer the lens, is used to adjust between displaying distances in meters or yards. Users can’t adjust the style of the aiming crosshairs.

The Callaway RAZR uses one 3-volt CR2 battery that inserts through a twist cap below the viewfinder.

The Callaway RAZR features one always on-mode, First Target Priority. This mode will try to find whatever target is closest to the user, not just flagsticks, and is intended to ignore larger objects behind the target. In practice, the functionality was extremely disappointing and we struggled repeatedly with First Target Priority, finding that the RAZR rapidly lost the ability to target pins at any reasonable distance (even under 100 yards), and that we needed to target the flag or green at the base of the flagstick in order to reliably get distance readings. That may be the best practice regardless, but it is clear that the sensitivity of the First Target Priority mode is far behind other devices. The only good news is that the laser is always fired for 8 seconds and users don’t need to hold down the fire button, so you can stick with that pin and make quadruplely sure you get the right reading. Once the laser is done firing, the distance will display for an additional 8 seconds.

The RAZR shows distances down to 0.1 yards for all distances shown. Don’t take this to mean that it has +/- 0.1 level of accuracy, most likely the device is +/- 1 yard, though Callaway doesn’t make any statements in this regard.

A firm short press (under 2 seconds) of the mode button will turn on backlighting, intended to help in low lighting conditions such as at dusk. The backlight brings a red tint to the display, which makes a slight difference in some lighting conditions, and none in others. The backlight is a temporary feature, and turns off once the laser is done firing and displaying the distance. That means when you get to your next shot and want the distance, or if you decide to shoot again from your same position, you’ll have to turn the backlight on all over again instead of keeping it on as a default setting. Bummer.

As we are fair-weather players, we can’t comment on the device’s capabilities in the rain, though the RAZR is waterproof (nitrogen filled and sealed with O-ringers). Just remember not to expect lasers to provide readings in either downpours or fog.

Callaway markets a range of up to 600 yards to most objects under optimal conditions. This doesn’t match the longest distances of some lasers, though it is certainly long enough for us.

Ease of Locking on a Target:
We found that even with Callaway’s First Target Priority Mode always on, the RAZR struggled to pick up pins and clearly didn’t have the sensitivity of competing devices. We started to have issues picking up the pin under yards, and it became nearly impossible at 200 yards. Our advice if you purchase the RAZR? Always aim for the flag or base of the flagstick.

Speed Test:
PinSeeker-Only Mode
As above, the Callaway RAZR is always in First Target Priority Mode. The RAZR is marketed as being quick to provide distances, and we found it was average among the competition in our laser rangefinder speed test.

The Callaway RAZR laser rangefinder retails for $349.95, slightly below the average price for laser rangefinders without slope adjusted distance capability. In this range it does have direct (and stiff) competition from multiple Bushnell and Leupold devices (less so the Laser Link Red Hot) at roughly same price point. The device is small and light, the basic feature set is fine, but the performance at picking up the pin was far below the competition.