Celestron is a company best known for its telescopes, binoculars and microscopes. We’re not sure what led it into the golf GPS world, but they’ve entered the market with the Celestron CoursePro Elite and its less fully-featured sister product, the CoursePro.

The CoursePro Elite is a relatively basic device that provides distances to the front, middle and back of the green. Celestron’s course maps do not come with yardages to hazards and layup targets. Users have the option of customizing the course maps on their own and adding up to six additional hazards or targets per hole. Basic shot tracking and keeping score (but not statistics) for a single player are available on the device, which would have been pretty fancy about three or four years ago, but is now almost obligatory on all but the simplest devices.

What left us scratching our collective heads was why such simple functionality had to come in such a large package. The CoursePro Elite is as bulky as some of the most full featured devices on the market (although it is not particularly heavy).

One shining light of the Celestron CoursePro Elite is that it can display twelve different languages (English, Spanish, French, German, Italian, Traditional Chinese, Simplified Chinese, Japanese, Korean, Russian, Swedish and Czech), so it may be quite useful to players for whom English is not their first language.

We were left with the impression that the CoursePro Elite is a bit of a “tweener” – not cheap or compact enough to impress as a downmarket device, and while it has some helpful features, it doesn’t have enough of them to join the big boys at higher price points.

Suggestion Box: The input jack on the CoursePro Elite for the USB/mini cable is on the back of device – so when the cable is connected, you cannot lay the device flat on its back. We would prefer to see the input jack on the bottom of the device, similar to the way that smartphones and other golf GPS devices are designed.

What’s in the Box: The Celestron CoursePro Elite comes with the accessories listed below. Five (5) free course downloads from the Celestron web site are also included. Consumers should note that the device requires Windows XP/Vista/Windows 7 and is not supported on the Mac.

Critical Golf Test: The Celestron CoursePro Elite fell toward the back of the pack in our test of availability of golf courses, with 79% coverage, which was particularly disappointing since the device only provides basic front/middle/back data – competing devices that are limited to front/middle/back data generally scored in the mid-90s and above. Coverage both by type of course and geography was generally evenly dispersed, although the course database was particularly weak in the “Best New” course category.

Manufacturer’s Claims: Celestron claims to have 22,000 courses in its database. A sizeable number, but it still leaves the CoursePro Elite trailing the bulk of the competition.

Suggestion Box: The hook for the belt clip protrudes from the back of the device, making it a bit bulkier if you keep it in your pocket. It looks like it can be removed with a Phillips-head screwdriver, but that seems like unnecessary work. We would prefer if the hook was not attached by default.

For more details, check out the Critical Golf comparison of ease of use.

The Good: Users can customize course maps, adding up to six of their own hazards/layup targets per hole. Heck, users can actually map a course on their own (and relatively easily at that).

The Bad: If you want hazard or layup yardages, you HAVE to mark them yourself – the course maps only come with distances to the front/middle/back of the green. 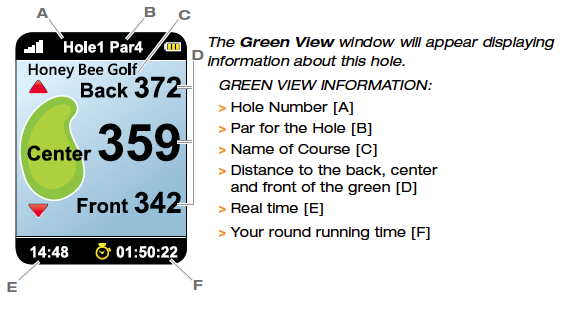 The Bad: Missing lots of simple things, such as auto-advancing between holes. 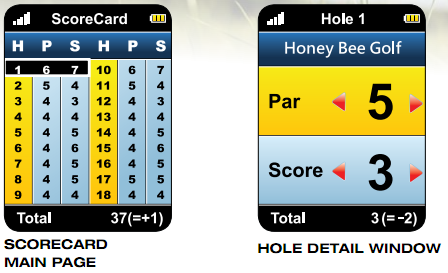 Our tests of the Celestron on a variety of courses produced accuracy readings within 3-4 yards of sprinkler head markings and our laser readings. Where the Celestron failed us was that for one course, the map was missing both the third and fourth holes. Ummm…that’s not gonna help our score very much. Because the holes are missing entirely, we couldn’t even go back and customize the distances ourselves for those two holes. If Celestron is going to charge for access to their course database, they will need to focus a bit more on quality control.

Retail Price: At a retail price of $149.95, the Celestron CoursePro Elite is in the low end of the price range of GPS devices. The devices with which it is most competitive from a feature set standpoint are priced from $99.95 (the Izzo SWAMI) to $149.99 (the Bushnell neo+) to $249.99 (the Garmin S1, where much of the premium is for the convenience of having a GPS device in a wrist watch form factor).

Fees for Access to Course Database: The CoursePro Elite comes with five free course downloads. After that, the user must choose between either paying for courses a la carte at a price of $2.99 per course, or paying a one-time fee of $34.99 for access to unlimited course downloads.

Value: Our definition of “value” is getting the most for your money, and while the Celestron CoursePro Elite is relatively inexpensive, the combination of its relatively spartan features, unwieldy size and the scary course map inaccuracy we experienced prevented us from embracing it wholeheartedly. We note that those who are buying the CoursePro Elite because it can display another language would derive greater value from the device.