OVERALL RATING: 92. GRADE: A-. The Garmin Approach G3 is the latest Garmin-branded golf GPS device, and delivers everything that the predecessor Garmin Approach G5 unit does, in a smaller package and with a lower price. “Breathtaking. I shall call him…Mini-Me.”

The Garmin Approach G3 is a solid unit (maybe a little too solid when you slip it into your pocket, since despite its small size, it’s still relatively heavy at 5.35 ounces – compare this to the Callaway uPro at 3.1 ounces). Like the G5, it suffers from one of the problems inherent with touchscreens, which is that it can be difficult to accurately pinpoint your desired targets (particularly if you have large fingers), but the touchscreen also makes navigating among the G3’s different features simple and intuitive. Garmin’s use of illustrations of holes, as opposed to actual satellite photographs, is really starting to grow on us – the illustrations are much brighter than photographs, and are thus viewable in all light conditions. An added bonus is that the Gamin Approach G3 requires absolutely no set-up time at all, with all courses pre-loaded on the device.

One of our few complaints is that we wish the device had the ability to track statistics – an unfortunate oversight for a premium device. And while we’re nit-picking, the combination of the G3’s bulky shape and weight make it a bit of a brick in your pocket. A 20% smaller and lighter brick than the G5, but a brick nonetheless. As a note, since the G3 is so similar to the G5, we borrowed liberally from the text of our earlier review for the G5 in writing this one…We’re not lazy…just efficient!

The Good: The Garmin Approach G3 scores a perfect 100 for setup – all the user does is install a pair of AA batteries (not included) and turn on the device. Courses are pre-loaded so no downloads are necessary.

The Bad: Absolutely nothing.

What’s in the Box: The Garmin Approach G3 comes with:

Critical Golf Test: Garmin keeps adding courses to its database, now scoring 97% in our course coverage test, which places it among the top devices in overall coverage.

Manufacturer’s Claims: Garmin claims to have 17,000 courses in the United States and Canada in its database, which currently places the Approach G3 near the tops of our course coverage comparison test for the region. Unlike other manufacturers, however, the Garmin Approach G3 is a North America-specific device. So if you are looking for one device to use in other continents, you’ll want to look elsewhere.

The Good: Nice simple interface to access different features. Courses are all stored on the device, so the user doesn’t have to decide which ones to swap on or off of the device’s memory. The touchscreen makes finding distances to a targeted point (as well as the distance from that point to the middle of the green) as easy as touching the screen and moving a cross-hair over the desired point.

The Bad: Pre-marked distances are not viewable while the user is using the touchscreen to determine a custom distance. While targeting a desired point your finger may block the view of the cross-hair and distance. Two words of advice to Garmin Approach G3 purchasers: rechargeable batteries. We kept getting a warning screen that the battery power was “too low for full backlight”, even when the battery meter was showing between 1/2 and 3/4 of a charge remaining. 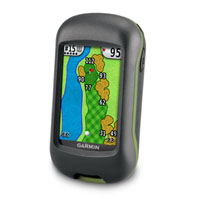 The Good: The ability to determine the distance to any point and to pinpoint the precise position of a target on the green provides tremendous flexibility, and Garmin complements this with pre-marked distances to many relevant hazards and targets. The view of the green rotates based upon where the user is standing in hole view.

The Bad: Fairly random as to when distances to hazards are displayed – distances to points may appear and then disappear as you approach them, or may only appear once you are so close to them that the distance is irrelevant. 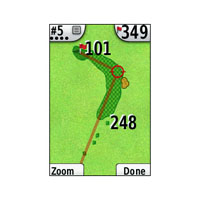 The Good: A solid grouping of useful features that are executed well. Plus it’s waterproof!

The Bad: There is no ability to record statistics, nor can the user modify any settings during the course of their round.

We tested the Garmin Approach G3 on a variety of courses and found the accuracy readings to be within 3-4 yards of sprinkler head markings and our laser readings. This was a bit better than we experienced with the G5, but we suspect that we just had lousy satellite reception on the days we were testing the G5, since we presume that the two devices share exactly the same course maps and GPS chipset. One thing we liked is that the G3 continues to provide distance readings no matter how close the user is to the target, unlike some competing devices.

Retail Price: At a retail price of $269.99, the Garmin Approach G3 comes in below the typical price point for competitive devices with hole views, such as the GolfBuddy series, SkyCaddie SGX, and Golf Guru 4.

Fees for Access to Course Database: An additional bonus for the G3 is that there are no fees for access to Garmin’s course database.

Three-Year Total Cost of Ownership: Since there is no cost for access to the course database, the three-year total cost of ownership of the Garmin Approach G3 is $269.99 (the cost of the device itself), which makes it one of the least expensive devices featuring full hole graphics in our cost comparison of golf GPS devices.

Value: The Garmin Approach G3 gets a strong value rating, delivering the wealth of features that we loved in its big brother, the Approach G5, but for $80 less. Our definition of “value” is getting the most for your money – with the G3, you get a premium golf GPS device with a rich feature set at an attractive price, and with no fees for access to the course database. Go to the head of the class!