GolfBuddy has updated its existing product lineup of the World and World Platinum by introducing the …drumroll please…Platinum. Seriously? Who’s the product naming genius over there? Talk about mailing it in! Even more confusingly, this device shows up listed by some retailers as the Platinum II. In any event, the new Platinum purports to have an improved high-contrast screen and an improved sensitive touchscreen.

Our findings were that the screen, while arguably incrementally brighter, wasn’t markedly better. As far as the touchscreen goes, it continues to be one of the weak points of the product, often requiring multiple taps to select menus and necessitating v-e-r-y accurate touches to the screen to make sure you’ve selected the desired option. When selecting specific points on the hole or placing the flagstick, it becomes readily apparent that there is a limited “grid” of points on the screen that can be utilized.

We still generally like the GolfBuddy Platinum. The device has a straightforward user interface, good graphics, and all the basic features. The GolfBuddy Platinum comes with all courses pre-loaded and requires no subscription fees to access updates to the course database (which achieved a perfect 100 in our course coverage test!). But given the lack of improvements, it seems to be worth going with the older generation GolfBuddy World Platinum or the more compact GolfBuddy World…or waiting for the next product, which will undoubtedly be named the Platinum World.

The Good: Courses worldwide are pre-installed, and no software installation or initial downloading is required – just charge the device (which takes approximately 4 hours from a drained battery) and you’re good to go. When charging the device the display will turn on and indicate the level of charge.

The Bad: Syncing courses can take quite some time. The client software, GolfBuddy World Course Manager (inaccurately named, as it also works for the Platinum, Voice, and World Platinum) was buggy in recognizing the device, syncing, and when disconnecting device. No progress has been made to this software since earlier product releases.

Details: Though all courses come pre-loaded on the device, it still makes sense to sync the GolfBuddy World when you take it out of the box to ensure that you benefit from any courses that have been recently added and receive any updates to the company’s maps and firmware. To sync you will need to install the GolfBuddy World Course Manager software on your computer, register for a free account, and sync your Platinum via the included cable. The Course Manager software took but a minute to download and was painless to install.

We don’t like the detailed information required during the GolfBuddy registration process. I wonder how many people live with me at 123 Main Street.

Upon launch, the Course Manager will first check to make sure you have the latest version of both the Course Manager and device firmware. Firmware download and installation takes a few minutes. After checking for software and firmware updates, the Course Manager will look to see if there are course updates based on user-selected regions. An update of all golf courses in the United States took close to fifteen minutes. To speed things up, we would recommend selecting just your home state and doing your best to remember to add other courses before your next golf vacation.

What’s in the Box: The GolfBuddy Platinum comes with the following:

Critical Golf Test: GolfBuddy tops our course coverage analysis with a perfect 100% coverage of our sampling of golf courses – what more can you say? Our scoring is based on the number of golf courses tested that offer full hole maps and green information.

Manufacturer’s Claims: GolfBuddy boasts of 34,500 courses available worldwide in its course database, the largest number for any golf GPS device tested. Note that this number includes any course for which GolfBuddy provides basic hole information – the company does not break out the total number of courses which have the complete detailed overhead hole maps and green maps. As a result, it may not be indicative of the number of courses for which all of the bells and whistles are available.

The Bad: With the Platinum we don’t see any improvements – the touchscreen isn’t as smooth as we would like, and we often weren’t able to quickly and accurately place the target cursor. Some settings, such as screen brightness, can only be modified during the satellite acquisition screen at startup. For whatever reason, you can’t view the time until you reach the tee box – so you’ll need to find another way to keep an eye on the clock while you warmup before the round. 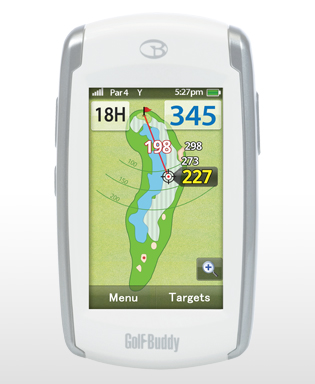 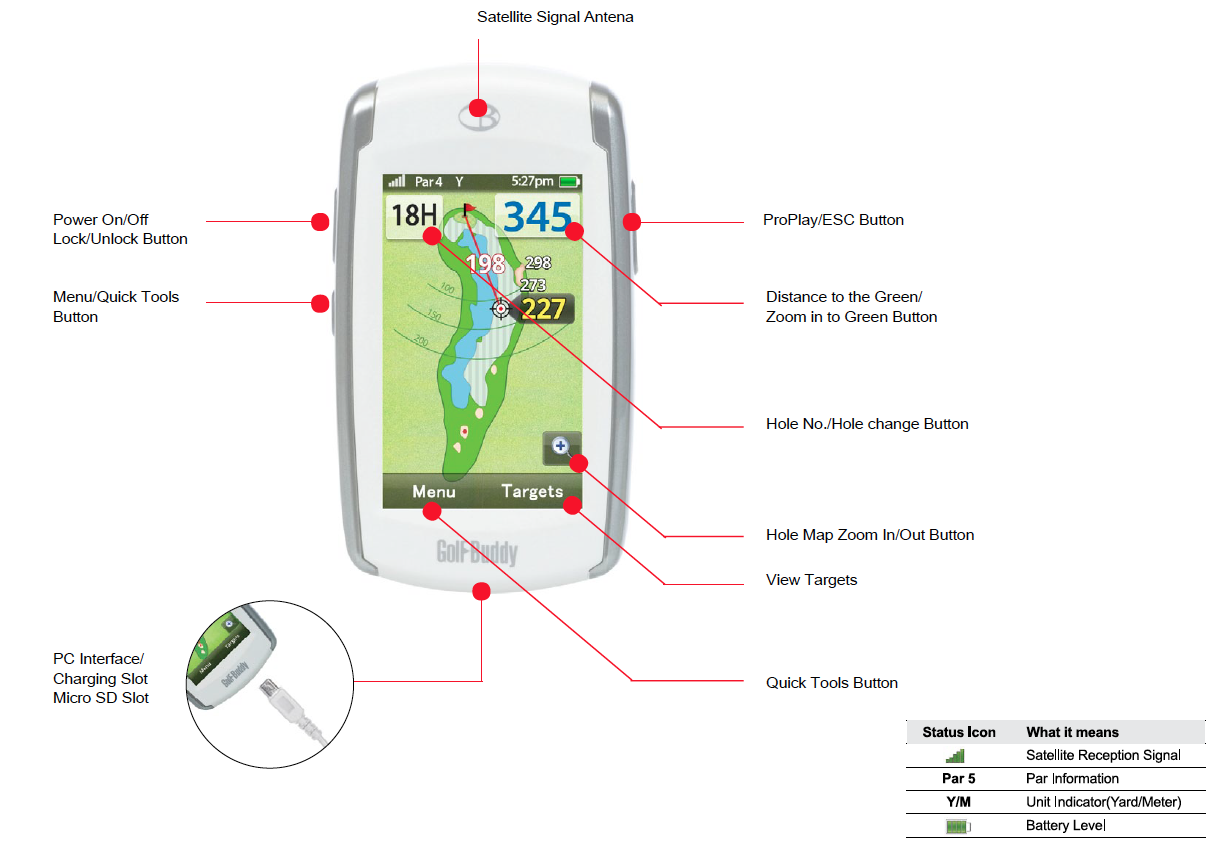 Check out our comparison of golf GPS device ease of use .

The Good: The GolfBuddy Platinum provides a large number of pre-mapped targets and hazards, and it is extremely easy to add your own custom points. 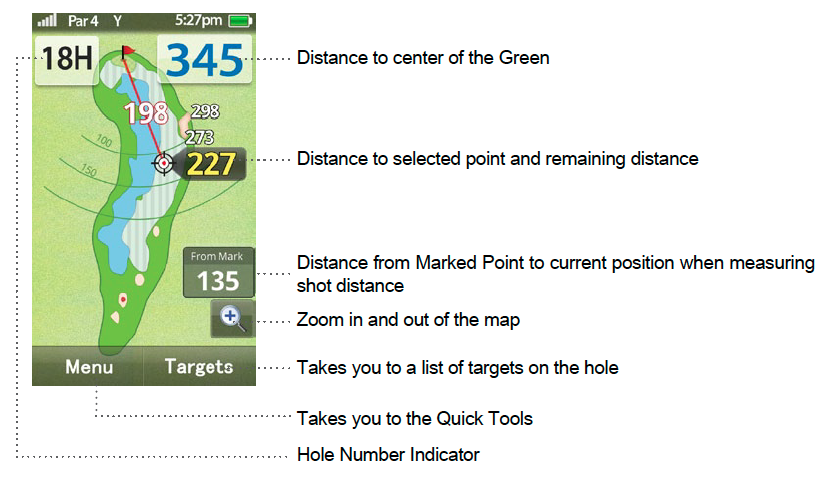 The Good: The GolfBuddy Platinum provides the basics that should be adequate for most players.

The Bad: Data junkies may find that that the set of statistics that can be tracked is still relatively basic. The portal on which to review scores and statistics could use some polish and additional functionality.

Device Accuracy: The GolfBuddy Platinum was accurate to within the standard margin of error for GPS devices we see, in the range of approximately 4 yards. Distances on holes stopped displaying at 10 yards to the nearest point of the green, at which point the device would only indicate “At Green.”

Mapping Accuracy: The illustrated maps generally accurately portray the holes and the greens, though we did find some incorrect mapping of bunkers and water hazards. We also found one hole that highlights the complexity that can occur when companies map courses based solely on satellite images. We were on a par 4 on a new course, and the GolfBuddy displayed 59 yards to the center of the green. Even with our eyesight not what it used to be ($#!@$ time in front of computer displays), we couldn’t see any green in the area. It was even a bit more challenging since the approach shot was largely blind. We guessed the green was about two hundred yards away, and sure enough a nearby sprinklerhead confirmed it at 185 yards. How could this happen? We went back and looked at a satellite map of the hole, and our guess is that the GolfBuddy mapping team was confused by a cart path that runs through the fairway, which they assumed was actually behind the green. But don’t get us started on the tomfoolery of a golf course design that puts a cart path across the fairway…arrrrrggghhh!

Retail Price: At $399 retail, the GolfBuddy Platinum is at the high end of pricing for dedicated golf GPS devices.

Fees for Access to Course Database: The GolfBuddy Platinum does not charge any additional subscription or per course fees.

Three-Year Total Cost of Ownership: Even with no additional subscription or course download fees, the GolfBuddy Platinum’s three-year total cost of ownership of $399 is in the top quartile of devices.

Value: The GolfBuddy Platinum has the highest three-year total cost of ownership for any device that doesn’t have additional subscription or per course fees (devices in the SkyCaddie, Sonocaddie and Golf Guru families charge additional fees that can greatly increase their cost of ownership). The Platinum does offer exceptional course coverage and it is an easy-to-use device with a solid interface. Though we like the GolfBuddy Platinum, users may want to consider stacking this up against the older GolfBuddy World Platinum (virtually the same device, still available from some retailers) and GolfBuddy World.