The Leupold GX-4i is the next progression in the family of laser rangefinders from Leupold. Like the Leupold GX-4, the GX-4i features a rugged aluminum body and form factor that we love, a red OLED display that makes distances easy to read against any background, pin-targeting, prism lock, and the ability to scan across targets while receiving updated distance readings. With the yellow faceplate attached, the device provides slope-adjusted distances, can factor in temperature and altitude, and even provide club recommendations. Given the Leupold GX-4i has these capabilities, it is not approved for tournament use by the USGA.

The Leupold GX-4i provides 6x magnification and a crisp display (albeit with a slight green tint), and only weighs 8.0 ounces. Enhancements to the device include an improved laser for accuracy within 6 inches and faster distance readings.

Sounds great, doesn’t it? But despite these changes, the device doesn’t feel like it has stepped forward from the prior version. Even though distances are now provided down to 1/10 of a yard, it’s slightly more difficult to lock on to flagsticks, and the bright OLED display rapidly blinks the distances as they are updated, creating a rather distracting interface (imagine the time on your digital clock blinking every time the seconds change).

For those who don’t require slope-adjusted distances or club selection assistance, the Leupold GX-3i provides the other features of the GX-4i in a slightly smaller package at a lower price point.

We have appreciated the form factor and good looks of Leupold laser rangefinders since their initial release, and this holds for the Leupold GX-4i. The GX-4i is just a hair larger than its younger brother, the Leupold GX-3i, and while it is one of the heavier vertically-held rangefinders in our tests, the difference between all of the devices is little more than an ounce. The included carry case has a slot through which a belt or strap can be threaded, but we still miss the simple clip to attach the device to our bag. A magnetic latch keeps the case closed but the GX-4i easily accessible, and a small zippered pouch at the bottom of the case stores the unused faceplate (see below for a discussion on the GX-4i’s removable faceplates).

The vertically-oriented device is easy to hold – the aluminum body has a rubber exterior that provides a solid grip. The GX-4i’s bright yellow faceplate lets others know that the player has access to slope-adjusted distances and club recommendations. The yellow “Smart Key” faceplate is swappable for a chrome faceplate that removes the additional functionality, though the USGA has rejected use of the GX-4i for tournaments even with chrome faceplate attached.

The 6x magnification of the Leupold family is the most common magnification provided by golf laser rangefinders (the Bushnell Hybrid is at 5x, and the Bushnell Pro 1M line and Leica Pinmaster 2 are at 7x). The user focuses the display by twisting the eyepiece, though the Leupold GX-4i is slightly more difficult to focus with a single hand than competing devices.

The Leupold features two buttons – one located on the top of the device that powers the device on/off and fires the laser, and the other on the left side of the device that allows the user to modify settings. To modify settings, the mode button is initially held for one second, then is pressed repeatedly to cycle between different functions. The power/laser button is then used to toggle between settings for a specific function. The Leupold GX-4i allows the user to select either yards or meters as the standard unit of distance. In addition, the GX-4i provides settings for the user to turn on fog mode and slope-adjusted distances/club recommendation mode, and to manually input the altitude and temperature (for slope-adjusted distance calculations). When slope-adjusted distances (TGR) is turned “on”, club recommendations will always appear after firing the laser.

The red OLED display is easy to read against dark or shadowy backgrounds and bright targets alike. The viewfinder has a slight greenish tint, which is noticeable but not distracting, though we do prefer rangefinders without any tint to the display (such as those on the Bushnell Pro 1M and Leica Pinmaster 2 rangefinders).

The Leupold GX-4i’s “panning” mode enables the user to scan the course to obtain distances to different points while holding down the power/laser button. The device rapidly updates distance readings when panning across new targets, providing updated slope-adjusted distances, line-of-sight distances, and the angle of slope. The speed that the distances are updated will vary slightly depending on target, but are extremely rapid in any situation.

As mentioned earlier, we found the display distracting due to the combination of a rapidly blinking line-of-sight distance, slope-adjusted distance, and slope angle readings, exacerbated by the fact that the line of sight distance displays an additional digit (0.1 of a yard). With the chrome faceplate on, and thus no slope adjusted distances updating above the crosshair or angle information, we found the blinking distance reading slightly less distracting. We’ll let you decide the benefit of showing distances to 0.1 of a yard – it reminds us of Tom Watson’s irritated question as his caddy was providing multiple distances to him: “Well, which is it…143 or 144?” Perhaps today’s pros want to know if it’s 143.1 or 143.2?

The Leupold GX-4i takes one CR-2 Lithium battery. A battery meter is positioned in the lower center of the viewfinder.

The Leupold GX-4i has a pin-locating feature, which Leupold calls “PinHunter”, that makes it easier to determine the distance to specific targets such as flagsticks by filtering out readings from larger more “reflective” objects (like trees) in the background. It’s a great feature to have, but we found that the Leupold GX-4i has slightly less room for error before the device starts picking up objects in the background, often providing background distances when the target tree trunk or pin is still within a portion of the target cursor. The advantage to this is that it is easier to purposely target background objects when you have little room around tree trunks or branches (true, we aren’t always in the center of the fairway…it happens), but overall we would prefer that “PinHunter” give a bit more precedence to targets in the foreground.

Leupold uses its pin-locating mode all of the time, including while the user is panning across multiple objects, instead of requiring the user to switch back and forth between a panning mode and a “pin-locating” mode. The GX-4i also includes a “Fog Mode” that can be turned on and off to improve performance in fog and rain to screen out false readings, essentially turning off the “PinHunter” mode.

To make obtaining distances to flagsticks with reflective prisms even easier, the GX-4i features “Prism Lock,” a feature that is always enabled when scanning at distances over 30 yards. When the Leupold identifies a flagstick equipped with a reflective prism, it will emit an audible beep (you can turn this off), show brackets around the cursor and then freeze the display at the measured distance. It makes locking on to flagsticks with prisms at a distance so easy you’ll wonder why more manufacturers don’t have this functionality, and why more courses don’t have flagsticks with prisms. 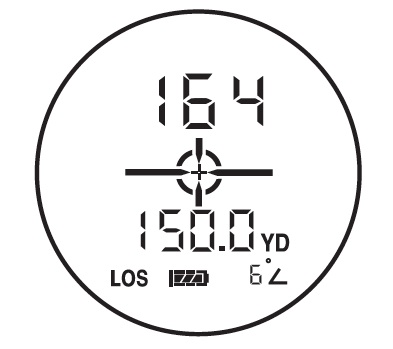 The GX-4i features “TGR” (“True Golf Range”) functionality, which displays the adjusted distance based on the slope between the user and the target (to the nearest yard, unlike the line-of-site distances that are provided to the nearest 1/10 of a yard), and will adjust distance based on temperature and altitude that is manually input by the user. If desired, the unit can provide recommended clubs for each shot – users input their average shot distances for 3 clubs (8-iron, 6-iron and 4-iron; or simply enter an average 8-iron distance and the Leupold will estimate the 6 and 4-iron distances) along with the altitude and temperature for these averages, and then the Leupold works its magic. When users have activated the club selector to provide recommendations, the GX-4i will display the adjusted distance alone while the “fire” button is depressed, and then, only after the button is released, display the recommend club.

We like that the display of the Leupold GX-4i shows slope-adjusted distance above the crosshair (there are three crosshair styles to choose from – see image to the right) while in “TGR” mode, while continuing to show line-of-sight distance and the angle of slope in the bottom right. We were also happy to see that Leupold fixed the glitch with the GX-4, where the device continued to display a negative angle when panning from negative to positive angled targets.

Leupold’s marketing materials state that the GX-4i is rated to provide distances to flagsticks and reflective targets at up to 450/800 yards under optimal conditions. Distance readings will continue to be displayed on the OLED for approximately 8 seconds after the firing button is released. The Leupold GX-4i allows users to continuously fire the laser for over 2 minutes, long enough to scan across all the targets you like.

While we do not test to reflective targets/prisms, on-course experience revealed that the GX-4i easily and quickly locks onto prisms at distances well in excess of 300 yards – a fabulous feature to have available.

The Leupold GX-4i updates distance readings extremely rapidly, and the speed with which the device updates does not appear to be impacted by whether slope-adjusted distances are also provided. The device doesn’t update distances at a fixed speed, but rather updates will vary slightly depending on target. While the distances are updated quickly, the long times in our tests were due to the GX-4i’s struggle to lock onto the pin, hopping between flagstick and background readings.

At $625 retail, the Leupold GX-4i maintains Leupold’s history of premium pricing, ranking as the most expensive laser rangefinder with slope-adjusted distances at time of testing. The GX-4i provides functionality that no other device offers, but its ease of use could be improved.

Those who don’t require slope-adjusted distances and club recommendations may want to consider the Leupold GX-3i, which costs nearly $200 less.