The Callaway GPSync Watch is actually produced by IZZO and marketed under the Callaway brand pursuant to a license agreement. IZZO has apparently discontinued its own line of Swami watches in order to avoid cannibalizing sales of the GPSync.

The availability of hazard information is nice, although it’s often difficult to determine which hazards are actually being presented. The GPSync will tell you that there’s a hazard that is 194 yards to reach and 210 yards to carry, but it doesn’t indicate which side of the fairway the hazard is on, and if there are multiple hazards on the same side, good luck guessing which one the GPSync is identifying. Scoring on the watch is nice, but the statistics that can be tracked are a bit limited, and there’s no aggregation of data (either on the mobile app or on a web site) to show how you’re progressing over time.

After the demise of the Callaway uPro line of devices (which we liked a lot), we were hoping that this new release would represent a resurgence of the chevron brand, but the GPSync, while a functional device, never really excites in any way, and is pricy relative to what you get. 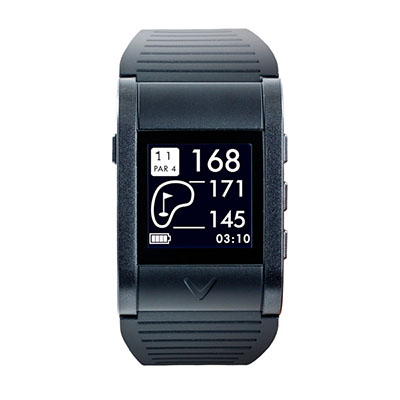 For more details, check out the Critical Golf comparison of golf GPS device ease of use.

The Callaway GPSync generally returned distances within our standard expected range of variance for GPS devices, usually plus or minus up to 4 yards from actual distances (based on marked sprinkler heads). It was, however, usually somewhat slow in stabilizing on a distance compared to other devices we were testing concurrently, which doesn’t exactly instill confidence that you have the right yardage.

We did encounter one instance of an outdated course map, as a course that has been re-routed for almost two years had not been updated. IZZO (the source of the course database for the GPSync) has to catch up to iGolf and other course database providers!

Retail Price: The Callaway GPSync golf GPS watch retails for $299.99, which puts it a bit above average among the golf GPS watches in our tests.

Fees for Access to Course Database: There are no additional fees for course map updates to the Callaway GPSync (but if you’re a Mac owner, you can’t get them on to the watch).

Three-Year Total Cost of Ownership: With no additional yearly fees to download the latest course information, the three-year total cost for the Callaway GPSync remains $299.99. At this price point, it is right at the average among the golf GPS watches in our tests.

Value: The pricing of the Callaway GPSync seems out of sync (no pun intended) with its feature set. We would lean toward paying slightly more in order to get a better product.

Read it? Watch it: