The Garmin Approach G8 retains the sleek design of the prior generation Garmin G6, providing distances to the front/center/back of the green, selected hazards and doglegs and the ability to pinpoint the distance to any target on the course. To help plan your attack, the G8 can display layup arcs at 100, 150, 200 and 250 yards.

The Approach G8 has the same battery life as the rest of the family (an estimated 15 hours), multiple scoring options for up to four players, and the ability to track statistics such as fairways hit and putts. Relatively new is the Garmin Connect online portal to upload scores and track progress over time. Oh, and it’s waterproof to boot.

At a retail price of $350, the Approach G8 is $100 more than the Garmin Approach G7, which is a hefty price for additional functionality that we don’t value all that much. To us the primary benefit of the G8 is the larger 3″ screen, but if you frequently get stuck behind trees with a blind shot or like the ease of Wi-Fi for updating courses, perhaps you’ll find the extra dollars worth it.

At startup, you select the language and unit of distance (yards/meters) for the device, and can also enter estimates on how far you hit each club (which the device will then use to provide you with club recommendations). At a minimum you need to enter distances for three clubs – the G8 can extrapolate the rest if you like. Then, since all of the course maps are preloaded and there’s no need to make payment for an initial or yearly fee, you are ready to hit the course.

Though courses are pre-loaded on the device, you’ll want to check-in periodically to make sure you have the latest updates. Software and map updates repeatedly took less time than Garmin’s initial estimates, taking at most 25 minutes in total.

The desktop software is user-friendly, with the ability to get additional device info, help and manuals, and to reinstall maps. Connecting to a Wi-Fi network to download course maps and software is an easy process. We didn’t experience any of the software crashes that we have in the past – well done, Garmin!

Syncs of statistics and scoring from a round went smoothly when we connected through the USB cord. One hiccup is that we were often prompted to update map information on the device, which rerouted us to another Garmin page to download map information for hiking, etc. that was ultimately a dead end. We were unable, however, to get the Approach G8 to sync statistics and scoring data either via Wi-Fi or via Bluetooth through the use of our iPhone and the Garmin Connect mobile app. Ah who cares, this wireless technology will never catch on anyway, right?

What’s in the Box: The Garmin Approach G8 comes with:

The Garmin Approach G8, like the rest of the Garmin golf GPS device family, comes pre-loaded with courses. For Garmin, that’s a claimed 39,000 courses worldwide. As far as our course coverage comparison test goes, Garmin comes in at an exceptional 99%. What more is there to say?

The Approach G8 is nice and slim, 2.1″ x 4.4″ x 0.6″, and at under 4 ounces is one of the lightest handheld golf GPS devices. The 3″ and 240 x 400 pixel color touchscreen is fine in sunlight and under clouds, though we generally kept it at the highest brightness settings to make it easier to read, even at the expense of some battery life. The device is so small, that we actually wouldn’t mind if the body, and screen, was a bit larger.

Using the device is straightforward, including utilizing the touchscreen to target points and enter scores. There are a number of user interface elements, however, that drove us batty, including an inability to easily access your scorecard, the need to manually exit the scoring screen and return to the hole view in order for the device to auto-advance to the next hole, and the requirement to type in a new player name if you (accidentally) select the player on a certain screen. These aren’t deal breakers, but they make the device a bit more annoying to use than it needs to be. 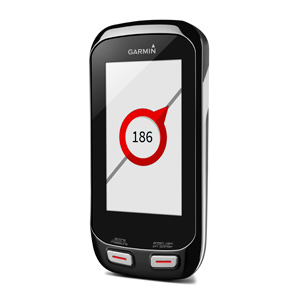 For more details, check out the Critical Golf comparison of golf GPS ease of use.

The Garmin Approach G8 uses bright graphic maps for course image details. With the ability to touch any point to receive distance information, selected hazards and doglegs, and layup arcs, you’ll have most of what you need to create a game plan for the hole. “PlaysLike” distances, the slope-adjusted yardages, are also displayed next to all distances unless otherwise indicated, but you can turn these off at any time.

One key item we would change is the somewhat random nature of when distances to mapped targets are displayed, and where distances are positioned relative to the point where you are touching the screen (these should be moved a bit to make them easier to read and not be obscured by your finger). We also wouldn’t mind a text-only view of hazard and layup information – hey, there is a text view of green information, why not take advantage of other Garmin data? 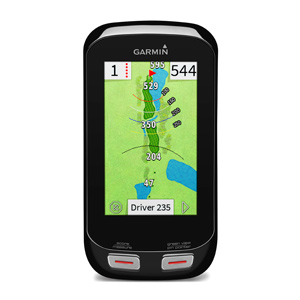 The main menu screen has the time, GPS signal strength, Bluetooth indicator, battery life, and adjustable brightness bar. You can also access notifications, save a new target point, lock the device or access other preferences.

FEATURES
The main feature that separates the G8 from other golf GPS devices (the exception being the Garmin Approach G7), is the new “PlaysLike Distance”, which provides the slope-adjusted distance. Combine this with most of the features that you could ever need, and you have a useful device.

Most of the main features listed below can be turned on and off through the main screen.

The Garmin G8 conforms to the standard GPS accuracy of being within a few yards of sprinkler heads and other distance markers. We did see some issues with hazards in particular – for example, the G8 would show us in a bunker when we were still a good 10 yards to the side. We also saw some courses with key points missing, such as cart paths and a number of trees, including those that were well in play, and in some cases, located in the fairway. We didn’t find any accuracy issues in terms of GPS location, but rather only in terms of mapping.

The only significant issue we found was with one out-of-date map for a course in a small town in the Midwest that was updated a number of years ago. So even through the device may indicate a course is “Updated”, keep in mind this refers to the device having Garmin’s latest maps, even if those maps are out-of-date.

The Garmin Approach G8 retails for $349.99 and has no additional fees, putting it on par with other golf GPS handhelds that offer solid feature sets in our cost comparison of golf GPS devices.

The device that players will most often compare to the Garmin G8 is its little brother, the Garmin Approach G7, which retails for $100 less. The key benefits of the G8 over the G7 are, in order of importance to us, a larger screen (3.0″ v 2.6″ diagonal), higher display resolution (240×400 v 160×240), Wi-Fi and PinPointer. The other differences are a slightly larger body and a bit more weight with the Approach G8, though we consider these to be minor.

We are fans of the Garmin Approach G8’s form factor, lack of additional fees, and ability to easily determine distances, though have some concern around ease of use and the relatively small number of pre-mapped hazards displayed. The device and Garmin Connect online portal could both use some polish, but all in all, it is a good device. The additional cost for features such as PlaysLike or Wi-Fi aren’t really worth the price to us, but the value of these will undoubtedly depend on the player.