The Hank Haney Ultimate Putting System is a putting mat with an electrically powered ball return. The hole is set on a slight incline to promote the concept of getting the ball past the hole.

Calling it an “ultimate” putting system is probably an overstatement – we were disappointed in the quality of the putting surface, and as a “training aid,” it doesn’t do much other than provide a green strip on which to practice. The putting surface is so thin that it takes on the quality of the material below the mat – if it’s placed on thick carpet, the putts will roll extremely slowly, while setting it on a hardwood floor will result in quick putts. In addition, because the putting surface is so light, it tends to retain any creases or bulges from when it is rolled up.

The ball return works fine, but note that it must be plugged into an electrical outlet, which may constrain where you can actually set up the putting mat.

Even evaluating it purely as a putting mat, we were disappointed enough in the putting surface to conclude that there are better options on the market.

One would think this would be easy to set up – after all, you should just need to unroll the mat and then plug it into a nearby electrical outlet (its power cord is 5’4” long) to power the ball return mechanism. Unfortunately, the mat itself retains lots of wrinkles and bumps from when it is rolled up, so we spent lots of time trying (with only limited success) to smooth it out.

The mat is 9’1” long, making it the longest entry level mat we tested by just a hair, and it is a relatively standard 1’ wide. 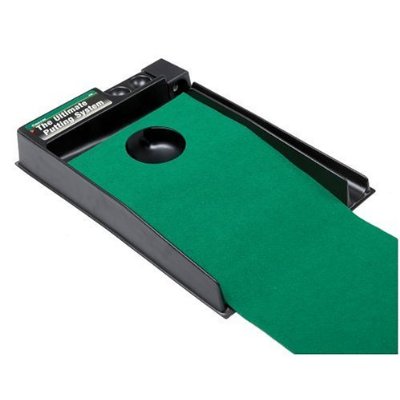 Other than its misleading name (“Ultimate Putting System”), the device doesn’t really profess to be anything other than a putting mat that will kick the ball back to you. The one thing that it does teach is putting with enough oomph to get the ball past the hole. It does so through two design elements – first, the hole is on a slight incline, which develops muscle memory for a stroke sufficient to get the ball past the hole when you actually attempt flat putts, and second, because the ball return will only send the ball back if you hole the putt or reach a trough located past the hole, you have plenty of incentive to add a little pace to your putts.

The Hank Haney Ultimate Putting System is saved from being a medium for a tedious chore by the consistent ball return. Practicing putting is monotonous enough without having to fish balls out of the hole or track down wayward putts. The ball return zips the ball back, allowing you to focus on the task at hand.

As mentioned above, the material from which the putting mat is made is too thin, which results in the retention of any creases or bulges from when it was rolled up. Somehow, we doubt that this replicates the condition of the greens at your local muni…and if it does, you should go play somewhere else. In addition, because the putting mat has no real heft to it, it will replicate the speed of the surface upon which it is placed. This is most problematic if you’re using it on a thick carpet, in which case it becomes like putting through heavy rough.

We also had some concerns about the plastic frame upon which the “hole” area is built – the plastic isn’t substantial enough, leading us to fear that it may crack over time or break if it’s stepped on.

Priced with an MSRP of $49.99, the Hank Haney Ultimate Putting System isn’t the most expensive putting mat on the market, but it doesn’t do much to stand out from the competition either. We liked the ball return mechanism, but our perception on value was driven down by the inferior quality of the putting surface.