OGIO is not afraid to think big when it comes to naming its golf travel bags – and thus they present us with the Mammoth. The Mammoth tips the scales at 17 pounds, making it the heaviest travel bag we’ve tested (exceeding hard cases such as the Samsonite Hardside and the SKB Deluxe). But everyone knows the old adage of “the bigger they are, the harder they fall” – and it holds true in this case…literally, as it takes a fair amount of preparation work to avoid the Mammoth’s propensity to tip over.

The bag provides a nice amount of protection for your clubs, has plenty of storage room, and introduces some useful gizmos like a crush-resistant pocket to hold caps and a removable shoe bag. But OGIO doesn’t deliver on the promise of being able to easily roll the Mammoth standing upright on its four spinner wheels, as the soft case sometimes struggles to stay balanced. The saving grace for the Mammoth is that it also has two in-line skate wheels, so you can drag it behind you.

What ultimately turns the tide against the Mammoth is its steep $309.99 suggested retail price, the second highest in our test group. To justify that level of pricing, you need a real differentiator, and we couldn’t find anything in the Mammoth that really stood out.

[Editor’s Note: We revisited this review after taking the Mammoth on a second trip and improved the ratings based on finding the secret of how to get the bag to stand up – you must cinch the internal and external straps as tightly as humanly possible. See, contrary to what our wives think, we DO have an easier time admitting when we’re wrong than the Fonz does!]

The OGIO Mammoth is a soft case made of a weave of nylon and polyester. The entire bottom of the bag is hard plastic, which extends up the rear of the bag to provide stability and structure. OGIO calls this the SLED (Structural Load Equalizing Deck), and at nearly 31 inches long, the plastic back consists of more than half the length of the Mammoth and is longer than that found on competitive soft bags such as the Club Glove Last Bag (approximately 28 inches).

The SLED is purportedly weighted to keep the Mammoth balanced when it is stood up on its base. The ability to stand the bag up, of course, is a key factor in taking advantage of the four spinner wheels mounted on the bottom of the bag. As described below, we had mixed results in getting the bag to stay standing up, and when it’s sagging in one direction or another, the spinner wheels are essentially rendered useless. 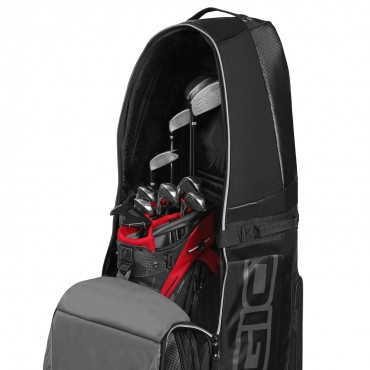 OGIO is generous in providing additional protection for your clubs. The 40% of the back of the bag that extends above the SLED is reinforced with a thin layer of plastic, providing some protection for your club heads. This is supplemented with a thick protective pad (described below). The remaining surface area of the bag (the front panel and parts of the side panels) features light padding. Dual two-way zippers run the length of the bag, providing easy access to the contents.

The design of the OGIO Mammoth includes:

The Mammoth’s SLED design is supposed to provide structure and enable you to stand the bag up and roll it on the four spinner wheels mounted on the base. On our first trip, however, the SLED was more of a SLOUCH – Slumping Lifeless OGIO Unbalanced Crumpled Heap. Despite our best efforts, the Mammoth would consistently lean to one side or the other when we stood it up, and we were left with no choice but to resort to pulling it behind us on the two in-line skates. An overdose of caffeine while packing the Mammoth for our second trip, however, amped us up so much that we yanked the internal and external straps tighter than Sergio Garcia on the 17th hole at Sawgrass. And voila – the Mammoth stayed standing up, albeit a little slumpy. When the Mammoth is willing to stay erect (insert your own Michael Scott joke), the spinner wheels can be rolled over smooth surfaces – uneven ground, however, was always challenging, and would lead to us tipping it on the side and using the in-line skate wheels.

As befits its name, the Mammoth weighed in at a hulking 17 pounds (as tested), making it the heaviest bag we tested by about two pounds (exceeding the Samsonite Hardside and the SKB Deluxe, both of which are hard cases). But why should you care about the weight anyway? Well, aside from the ease of pulling the bag, airlines are now generally imposing excess weight penalties for bags that exceed 50 pounds – so you’ll have to be efficient in choosing what you will bring with you in the Mammoth.

We tested the OGIO Mammoth with a standard golf carry bag. As noted above, there are two internal straps in the Mammoth that enable you to secure your golf bag. Cinch them tight, my friends! Note, however, that these straps don’t come with simple clips, but instead require that you thread and unthread them through the buckle each time you stow or remove the bag. Seriously? 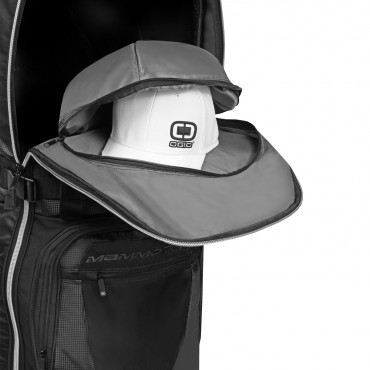 The interior of the Mammoth provides plenty of room to pack clothing for a trip. The bag has relatively generous padding, so we didn’t feel a real need to position items to provide protection for our clubs. There aren’t many pockets to help in organizing the contents, so our general packing strategy was just to roll things up and layer them around as evenly as possible, putting heavier items toward the bottom of the bag.

The removable shoe bag mounted on the front panel of the Mammoth made for easy storage of a pair of shoes, and had room for more. We liked the pocket for caps – our Wynn logo cap arrived at our destination in perfect condition.

The in-line skate wheels rolled nicely, but after having experienced the glories of four-wheeled golf travel bags, we found it difficult to transition back to a standard two-wheeler. In addition, the width of the bag (the Mammoth is essentially in uniform in its width, as opposed to the Club Glove Last Bag, which is narrower at the top) also resulted into it banging into the back of our legs on a fairly regular basis as we navigated our way through the airport and parking lot.

At a retail price of $309.99, the OGIO Mammoth is the second most expensive travel bag in our tests. If you could count on rolling it either standing upright or pulled behind you, the premium might be justified, but uncertainties about that turn it into a basically standard travel bag, making the price seem to be too dear.