The Bushnell Yardage Pro XGC+ has a good form factor and is quite light, with solid buttons, an intuitive menu and a color screen that works fine in different lighting conditions. We were disappointed, however, in how the hole maps are implemented – the device will move the target point you have selected on a whim, which creates a maddening experience. In addition, the lack of information on the map screen for distance to the hole, or pre-mapped targets, make the device fall short of the competition. One last quibble – the marketing materials lead one to believe that no course downloads are necessary, but the truth is that only distances to the green and selected pre-mapped targets come built-in to the device. If you want the overhead hole maps, you’ll have to download the specific courses that you play.

The Good: If you just need distances to front, center and back of the green, along with a small selection of pre-mapped targets, you can charge up the device and hit the course.

The Bad: The device is marketed as “ready to use out of the box” and “no course downloads necessary,” but this is only true if you just want pre-mapped distances and don’t care about course maps. If you want course maps, you’ll need to walk through the iGolf registration and syncing process to get up and running. We found it odd that course maps are not pre-loaded on the device, particularly since they are included at no extra cost for the first year.

What’s in the Box: The Bushnell Yardage Pro XGC+ comes packaged with:

Required Downloads: None for initial use. And just a small applet to sync the latest course data (see below).

Syncing: To sync the device (and download course maps), you will need to register for an iGolf account, which is free for the first year. Curiously, the iGolf site will indicate that the user has a number of “GPS Credits” after registering (it starts at 50), which leads us to believe that if you want to download more than 50 courses in the first year, you’ll have to pay an additional fee. Admittedly, we did not take the time to try to download that many courses. We do know, however, that if you want to download additional courses after the first year, you’ll need to cough up $34.99 annually.

Ensuring that your Yardage Pro XGC+ has the latest information requires logging in to your iGolf.com account, going to the “GPS Courses” tab (do not go to “Golf Courses”, which simply has reviews of golf courses), and search for the course that you would like to download and/or update. The search functionality works fine, and once you find and select the desired course you will need to select “Download GPS & Scorecard” (do NOT select “Download Scorecard”, which generates an error saying that it is not compatible with the XGC+, irritating one of our staff members to no end and prompting a rant best summarized as “If a button is going to generate an error every time I press it, it probably simply shouldn’t appear on the page”). You’ll need to allow an applet to access your computer and device, and thereafter the latest course data is loaded in 10-15 minutes.

Unfortunately, there is no way to sync more than one course at a time. You need to search and find the course, download it to your XGC+, search for the next course, and repeat – and this holds true even if there are resorts with multiple courses or combinations of 9-hole courses. We were left scratching our heads over why there isn’t the ability to sync all courses in a state, or even select multiple courses at once for a city or region and then load those with one button push. In addition, every 6 courses or so (if you want to download a bunch at once) you will have to enter a CAPTCHA code. Seriously?!?

And while we’re piling on, we note that the iGolf site doesn’t have the intelligence to know which courses are currently loaded on the device, and it will let you re-load the same course (even if you just loaded it), though fortunately it won’t deduct any credits for that already-downloaded course. “But Critical Golf,” you may ask, “surely you can just look on the device to see which maps have been downloaded?” Nope – the XGC+ doesn’t indicate which courses have maps loaded to the device either (and stop calling me Shirley). So if you ever forget what courses you have downloaded, you’ll just have to (re)download them. Also, the iGolf site will not automatically update your downloaded courses if there is a course update available, nor will it indicate there is a newer version of the course. The only way around this is to simply re-download all courses on occasion.

If you hadn’t guessed, we aren’t fans of the iGolf interface, and generally find the site caught between trying to be a golf portal and a site that supports Bushnell GPS devices and mobile iGolf applications. The end result is that it doesn’t do either very well, with site glitches ranging from incorrect course detail information, including websites and email addresses listed, to random text where the tech team at iGolf seemed to be testing website functionality.

Critical Golf Test: The Bushnell Yardage Pro XGC+ (well, actually its partner iGolf, who provides the course data), has a respectable 92% coverage across a representative group of 100 courses. When looking at coverage for the XGC+, we only count a course as “covered” if the following are available: distances to the front, center and back of the green, additional pre-mapped hazards/targets (aka “custom” points), and an overhead course map. We find it odd that iGolf/Bushnell only allows an XGC+ owner to request mapping of one course that isn’t already covered…that doesn’t strike us as consumer-friendly!

Manufacturer’s Claims: iGolf claims to have more than 25,000 courses in their GPS database worldwide, which puts it in the bottom half among the devices we’ve tested.

The Good: The device is intuitive to use, and the buttons easy to press – even manually typing in course names goes quickly. The device is one of the lighter devices that we’ve tested.
The Bad: Certain settings are only accessible after quitting your round (such as modifying the brightness setting).

Check out the Critical Golf comparison of ease of use.

The Good: Distances to the front, center and back of the green, along with additional pre-mapped targets, the ability to add your own custom targets, and overhead hole maps with 5 levels of zoom.
The Bad: A frustrating and awkward interface led us to often give up on the overhead course maps and simply use screen with text distances only. 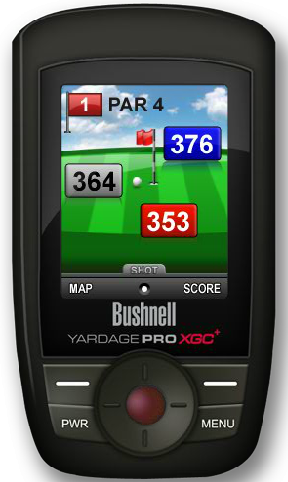