It’s rare that a company is completely truthful in its naming conventions, but Clicgear proves to be the exception to the rule with its introduction of the new Clicgear 3.5+. The Clicgear 3.5+ features only minor improvements to the earlier 3.0 that definitely wouldn’t justify jumping to a version 4.0. So kudos to Clicgear for being straight with the consumer (okay, maybe the “+” is a little bit of puffery).

The Clicgear 3.5+ still retains the rugged good looks, solid build and rock-steady performance of the prior version. New to the 3.5+ is an upgraded brake mechanism (an enhancement of the one that was introduced in the 3.0), a bigger storage net, and a new cup holder, umbrella holder bracket, and strap system. The 3.5+ also comes with a welcome reduction in MSRP, going down from $229 to $220. Oh, and for the fashion-conscious, the 3.5+ comes in eight new colors.

We continue to have our reservations over the complexities of unfolding the Clicgear cart, which isn’t the most intuitive of processes, and the fact that when it’s folded up, it becomes an awkward-shaped cube. And if you already have a Clicgear cart, the improvements on the 3.5+ are only incremental in nature, and probably not enough to warrant an upgrade.

But make no mistake, the Clicgear 3.5+ is still an excellent product, and the new features (and reduction in price) only make it easier for us to recommend it as one of the top golf push carts on the market.

We’d be remiss if we didn’t mention the wide range of accessories that are available for Clicgear carts. Our favorites include the shoe brush (perfect for scraping off grass and other gunk that clumps on your spikes) and the Clicgear MITT (great for keeping your hands warm and dry while pushing the cart), but there’s a whole host of additional add-ons, including a Clicgear SEAT, cooler bag, and upgraded umbrella holder with adjustable angle.

At 19.5 lbs. (as tested), the weight of the Clicgear 3.5+ creeps up another 0.5 lbs over the prior version, and the cart continues to sit in the heavier end of the spectrum among the push carts we tested. While the listed dimensions indicate that an inch of height has been shaved off (we have a sneaking suspicion that this change may just be a marketing decision to truncate the decimal point instead of rounding up), the cart still folds into a bit of an unwieldy block. Those of us with smaller cars wind up putting it into the back seat, as it would otherwise require some rearranging and engineering skill to stow a set of clubs with the Clicgear in the trunk. Two sets of clubs and two Clicgears is beyond our feeble packing capabilities.

Unfolding the Clicgear 3.5+ is not the most intuitive process, which may explain why the company makes instructional unfolding and folding videos available on their web site. Clicgear tries to make the 5-step process easier by highlighting the critical knobs and levers in bright colors, but despite the fact that we’ve used these carts many times, we still do a little bit of head-scratching each time we come back to them. It truthfully isn’t rocket science, but there is a sequence that must be followed, and if you try to do something out of order, you tend to hit a dead end and have to start all over again.

Clicgear has revamped the straps that hold the bag in place on the cart – the new design enables easier adjustments to the length of the straps. 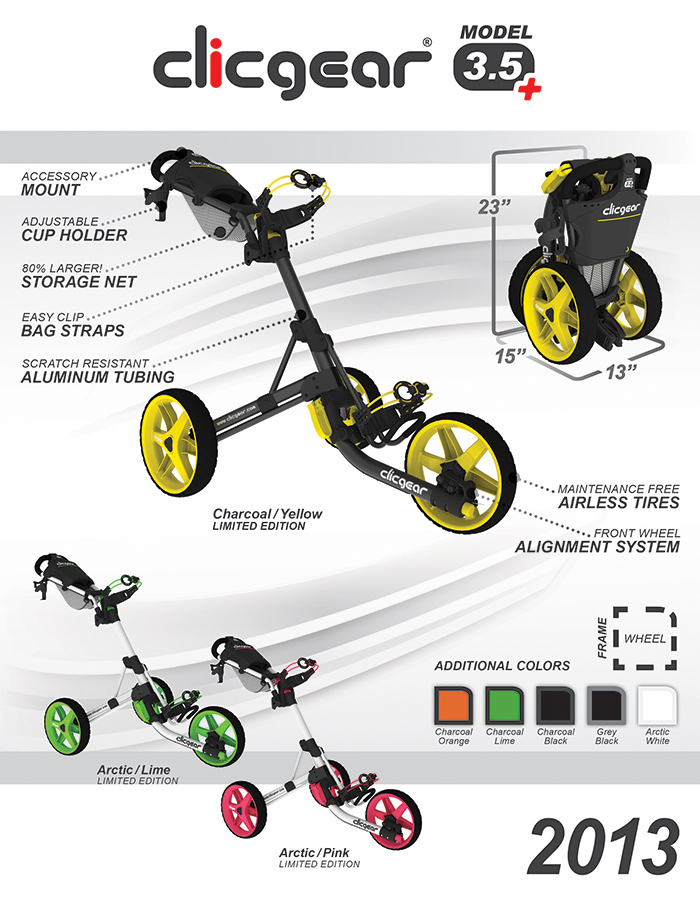 The storage and accessories available on the Clicgear 3.5+ include:

Clicgear also sells a wide range of other accessories that are compatible with the 3.5+ and their earlier generation carts, including a shoe brush, seat, GPS holder, iPhone holder, cooler bag, cigar minder, and mitts for chilly weather.

While other manufacturers have made a concerted effort to add some pizzazz to their cart designs, the Clicgear 3.5+ is still the coolest looking push cart on the market. We love the low profile, aggressive stance and flashy color combinations (well, maybe only some of the color combinations). The Clicgear 3.5+ is available in charcoal/yellow, charcoal/orange, charcoal/black, white/lime green, white/pink, white/white, and gray/black. New to the 3.5+ is consistency in the accent color of the wheels, knobs, handles, and bag straps in the flashier color combinations.

The charcoal/orange model we tested would be a big hit with fans of the Giants and the Beavers…and anyone else who also has a big ugly Scotty Cameron Detour head cover.

Even with its reduced retail price of $220.00 (down $9 from the prior version), the Clicgear 3.5+ is still one of the most expensive golf push carts among the units we tested. But with a nice feature set, solid fit and finish, and dependable performance on the course, the Clicgear 3.5+ provides first-rate value.