If you’ve ever bemoaned how difficult it is to fold and unfold your golf push cart, then the GolferPal EasyPal is the cart for you. Whether this is a problem that needed to be solved or not is a different question, although we do admit that folding and unfolding some carts can be somewhat complex (we’re looking right at you, Clicgear!). The GolferPal EasyPal is a 4-wheeled cart that folds and unfolds at the push of a button (well, you have to rotate a dial first, but “folds and unfolds with the rotation of a dial and the push of a button” doesn’t have the same marketing panache, does it?).

While the folding/unfolding was a piece of cake, the cart we purchased had a frame that caused it to continually drift to the right (even after we had adjusted the wheel alignments as much as possible). We can’t attest to the quality control across the entire production run of the EasyPal carts, but our experience of needing to constantly make adjustments while pushing the cart just to keep it moving in the right direction was a major bummer.

The other challenge with the EasyPal is that the cupholder and umbrella holder can’t be deployed on the cart while using the automatic fold/unfold function – they must be added and removed separately every time the cart is used. And it should come as no surprise that the cupholder has already been misplaced somewhere…

The GolferPal EasyPal otherwise performed relatively well around the course. The wheels are a good size and can handle different curb heights easily (small wheels sometimes get hung up on higher curbs). Storage space was okay, but not great (for example there isn’t a large storage net where you can store your headcovers and a jacket during the round).

The $399.99 MSRP is a bit ridiculous, but most online retailers we researched had it for about half the price. Even then, the EasyPal’s price is still around the median for the golf push carts we’ve tested. If you want a neat toy to show your friends on the course, and need the extra 10 seconds that it saves you at each folding or unfolding (at 20 seconds per round, and assuming you play every week, that’s 17.33 minutes per year!), it might be worth a shot. This, of course, assumes that the alignment problem we experienced was specific to our cart, and not a systemic issue.

Retail price: $399.99 (although it is available at multiple retailers for about half of that price)
Amazon.com: Check price now

At 20 pounds (per our test, which is significantly more than the 16.4 pounds quoted by the manufacturer), the GolferPal EasyPal is about average among the push carts we’ve tested. The EasyPal is a reasonable size when it’s folded – it has roughly the same dimensions as a Sun Mountain Micro-Cart, although it might be a hair taller. This makes it relatively easy to fit into a car trunk along with a set of clubs.

Set up was extremely easy – just pull the EasyPal out of the box, charge the battery (which is about the size of a calculator) using the included wall charger, and then slide the battery into place on the cart. As mentioned above, we also had to adjust the alignment of the front wheels, which is done by turning a screw on the front of the cart (there is a separate screw for each wheel).

Once that’s done, you rotate the dial to “unfold” and push the button. The cart typically unfolds in about 12 seconds (it folds in about 10 seconds). Pop your clubs on to the cart, secure them with the bungee strap, and you’re good to go!

The GolferPal EasyPal comes with an umbrella holder and a cup holder. The umbrella holder screws into place, and the cup holder clips on to a simple hook, but neither of them can be attached to the EasyPal when it is folded. As a result, you have to stow them somewhere safe, so you can’t lose them – something that we failed to do, so now we’re without a cupholder. Grrrr…

The storage and accessories available on the GolferPal EasyPal include:

We liked the way the GolferPal EasyPal looked. The four large tires give it a rugged, almost offroad feel. It’s available in two color combinations – black with red trim, and white with white trim.

The MSRP of $399.99 places it as the most expensive golf push cart we tested, but we found the EasyPal available for about half of that at most of the online retailers we checked, so that’s the basis on which we assessed its value. The automatic folding/unfolding is an interesting gadget, so if you put a premium on having something to show your buddies in the parking lot, this might be the toy for you. Otherwise, it’s an average golf cart.

Retail price: $399.99 (although it is available at multiple retailers for about half of that price)
Amazon.com: Check price now 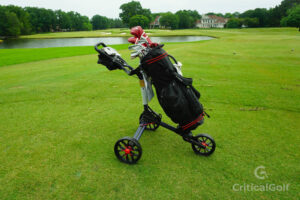